Syrian Refugees - The Moral Failure of the World 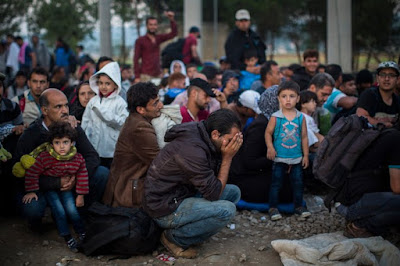 There is plenty of blame to go around in terms of who is responsible for the plight and needless deaths of Syrian refugees fleeing civil war and/or religious extremism in the form of ISIS.   That blame extends to world leaders - especially those of the Gulf nations - and to other religious leaders of other faiths.  Here in America, conservative Christians have spent - and continue to spend - millions of dollars to deprive LGBT Americans while pushing a form of religious extremism not far different than that of ISIS except for the level of violence and willingness to commit murder to further one's religious agenda (something Christians did with a vengeance in past eras).  As a column in the New York Times much of the moral bankruptcy in the west is a refusal to have empathy for those who have a different skin color, hold a different faith, and have different customs.

In my own case, my grandmother's ancestors were French Arcadians who settled in New Orleans after being thrown out of Canada by the British. My father's parents left Austria-Hungry on the eve of World War I.  Other ancestors  fled Ireland during the hard years of the Potato Famine and its aftermath.  Other than Native Americans, every one of us traces our ancestry back to either immigrants or refugees.  How often we forget that but for a fluke of birth, we could be among the refugees now trying to find refuge in Europe and elsewhere.  This is a reality the lunatics of the GOP base and Tea Party ignore.

Here are highlights from the Times column:

WATCHING the horrific images of Syrian refugees struggling toward safety — or in the case of Aylan Kurdi, 3, drowning on that journey — I think of other refugees. Albert Einstein. Madeleine Albright. The Dalai Lama.

In the aftermath of World War II, my father swam the Danube River to flee Romania and become part of a tide of refugees that nobody much cared about. Fortunately, a family in Portland, Ore., sponsored his way to the United States, making this column possible.

If you don’t see yourself or your family members in those images of today’s refugees, you need an empathy transplant.


Aylan’s death reflected a systematic failure of world leadership, from Arab capitals to European ones, from Moscow to Washington. This failure occurred at three levels:

■ The Syrian civil war has dragged on for four years now, taking almost 200,000 lives, without serious efforts to stop the bombings. Creating a safe zone would at least allow Syrians to remain in the country.

■ As millions of Syrian refugees swamped surrounding countries, the world shrugged. United Nations aid requests for Syrian refugees are only 41 percent funded, and the World Food Program was recently forced to slash its food allocation for refugees in Lebanon to just $13.50 per person a month. Half of Syrian refugee children are unable to go to school. So of course loving parents strike out for Europe.

■ Driven by xenophobia and demagogy, some Europeans have done their best to stigmatize refugees and hamper their journeys.

António Guterres, the head of the U.N. refugee agency, said the crisis was in part “a failure of leadership worldwide.”

“This is not a massive invasion,” he said, noting that about 4,000 people are arriving daily in a continent with more than half a billion inhabitants. “This is manageable, if there is political commitment and will.”

We all know that the world failed refugees in the run-up to World War II. The U.S. refused to allow Jewish refugees to disembark from a ship, the St. Louis, that had reached Miami. The ship returned to Europe, and some passengers died in the Holocaust.

Aylan, who had relatives in Canada who wanted to give him a home, found no port. He died on our watch.

Bravo in particular to Icelanders, who on Facebook have been volunteering to pay for the flights of Syrian refugees and then put them up in their homes. Thousands of Icelanders have backed this effort, under the slogan “Just because it isn’t happening here doesn’t mean it isn’t happening.”

Then there are the Persian Gulf countries. Amnesty International reports that Saudi Arabia, Kuwait and the United Arab Emirates haven’t accepted a single Syrian refugee (although they have allowed Syrians to stay without formal refugee status). Meanwhile, Saudi Arabia’s bombings of Yemen have only added to the global refugee crisis.

We Americans may be tempted to pat ourselves on the back. But the U.S. has accepted only about 1,500 Syrian refugees since the war began

There has been a vigorous public debate about whether the photo of Aylan’s drowned body should be shown by news organizations. But the real atrocity isn’t the photo but the death itself — and our ongoing moral failure to save the lives of children like Aylan.