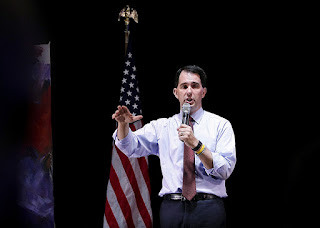 Sadly, among the base of today's Republican Party, black lives do not matter.  For that matter, neither do LGBT lives or the lives of those who are non-white and/or non-right wing Christian.  Yet, in typical form, the GOP presidential candidates are trying to whip up fear about crime and drive white voters - who they desperately need in higher and higher percentages - to vote Republican.  In many cities, police forces are out of control in terms of the unnecessary level of violence they use.  And sadly, blacks are often the targets of this excessive force.  By whipping up fear over crime, the GOP seeks to change the topic and push votes its way.  It's obscene, but then again, so is today's GOP.  Here are highlights from a piece in Slate:

Almost everyone has something to demagogue in the 2016 Republican primary. For Donald Trump, it’s Latino immigration, and Mexican migrants in particular. For Texas Sen. Ted Cruz, it’s the nuclear deal with Iran; for former Arkansas Gov. Mike Huckabee, it’s the Kim Davis affair in Kentucky, where a county official was jailed for refusing to sign marriage licenses for same-sex couples; and for New Jersey Gov. Chris Christie, it’s crime.


That may seem like a strange choice, given broad trends. National rates of violent crime are down to their lowest levels in a generation, with steep drops in gun homicide among all groups. And while violence is still a problem for isolated, low-income black Americans, the overall portrait is good: Twenty years after the crime waves of the 1990s, American cities and metropolitan areas are as safe as they’ve ever been.


Long-term trends can obscure short-term variations, however, and there’s contested evidence that we’re in the middle of a violent crime spike, sparked by a so-called Ferguson effect where less aggressive policing—fueled by “Black Lives Matter” protests—encourages criminals.
[H]umans are built to see patterns in unrelated events, and the crime increase—plus a rash of high-profile shootings aimed at police officers—has brought new partisan attacks on Black Lives Matter, even while 2015 stands as an unusually safe year for police officers, so far. “In the last six years under President Obama, we’ve seen a rise in anti-police rhetoric,” wrote Wisconsin Gov. Scott Walker in an op-ed last week, citing “demonstrations and chants where people describe police as ‘pigs’ and call for them to be ‘fried like bacon.’ ” Walker was referring to a small group of protesters in Minnesota who by all accounts are unrepresentative of the larger movement.

A struggling Christie—who, along with Huckabee and Cruz, lags far behind in the polls—has picked up on this, and run with it. On Tuesday, during an interview on MSNBC’s Morning Joe, the New Jersey governor slammed Democrats on crime. “It’s the liberal policies in this city that have led to the lawlessness that’s been encouraged by the president of the United States,” he said. “And I’m telling you, people in this country are getting more and more fed up.”

With crime and killings in the news, Democrats may be vulnerable to claims of indifference or even encouragement, given their support for Blacks Live Matter. Indeed, this violence threatens the whole project for criminal justice reform.

By blaming Obama and Black Lives Matter for an increase in crime or new attacks on police officers, they’re working to conjure the fear and uncertainty of the ’80s and ’90s—when violent crime was at an all-time high—and capitalize on them. And it’s worth noting the extent to which these appeals come at the same time that Republicans need to increase their share of the white vote to win a national majority. It’s no accident, . . .

Posted by Michael-in-Norfolk at Wednesday, September 09, 2015