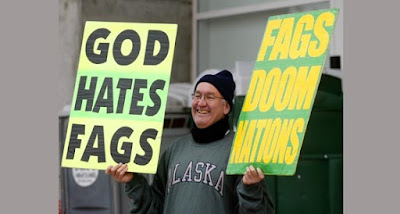 A new study out of Italy may have an explanation for the hysterical anti-gay behavior of Ken Cuccinelli, Rick Santorum, Tony Perkins, Brian Brown and a host of other professional Christians - they suffer from a form of mental illness.  (One other explanation, of course, is that these individuals are instead cynical parasites who suck money out of the mentally ill and ignorant).   The study finds that homophobia may actually be a psychiatric disorder involving elements of psychopathalogical disorders.    Here are highlights from Gaynewsnetwork:

[A] new study suggests homophobia may actually be a psychiatric disorder.

The study by Dr. Emmanuele Jannini, a professor of endocrinology and medical sexology at the University of Rome Tor Vergata, suggests homophobia presents elements of psychopathalogical disorders.

Jannini surveyed 551 university students to measure their levels of homophobia, defence mechanisms, attachment styles, and psychopathologic symptoms and discovered there was a “remarkable association between dysfunctional aspects of personality and homophobic attitude”.

[F]or the first time we demonstrated that the real disease to be cured is homophobia, associated with potentially severe psychopathologies,” wrote Dr Jannini in a press release.

Jannini suggested treating people who display risk signs for homophobia could assist in removing their prejudices towards LGBTI people.

At the risk of outraging the Bible beaters, I would also venture to say that far right Christians who react hysterically and/or violently to anything that threatens their fairy tale beliefs also suffer from mental disorders.