The Palinization of the GOP 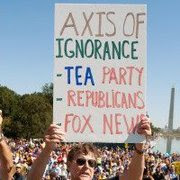 The caption of this post is the title of a new column in the Washington Post by Kathleen Parker - one of the increasingly rare breed of rational, thinking conservatives. Parker will not be winning any friends among the knuckle draggers who predominate in the Christianist/Tea Party base of the GOP, but what she has to say about the cult of ignorance in today's GOP is 100% true. This fusing of religion with politics and a complete abandonment of reason and logic are the reasons why I and so many people that I know have fled the GOP. Other than serious election defeats, I truly do not know what is going to turn around the intellectual decline of a party that once liked to view itself as educated and rational. Here are some highlights from Parker's on target column:

The headline on Democratic strategist Paul Begala’s recent Newsweek essay dodged subtlety: “The Stupid Party.” “Republicans used to admire intelligence. But now they’re dumbing themselves down,” was the subhead. Democrats couldn’t agree more. And quietly, many Republicans share the sentiment. They just can’t seem to stop themselves.

Republicans aren’t really stupid, of course, and Begala acknowledges this. But, as he also pointed out, the conservative brain trust once led by William F. Buckley has been supplanted by talk radio hosts who love to quote Buckley (and boast of his friendship) but who do not share the man’s pedigree or his nimble mind. Moreover, where Buckley tried to rid the GOP of fringe elements, notably the John Birch Society, today’s conservatives have let them back in.

Meanwhile, the big tent fashioned by Ronald Reagan has become bilious with the hot air of religious fervor. No one was more devout than the very-Catholic Buckley, but you didn’t see him convening revivals in the public square. Nor is it likely he would have embraced fundamentalist views that increasingly have forced the party into a corner where science and religion can’t coexist.

Scientific skepticism, the engine that propels intellectual inquiry, has morphed into skepticism of science fueled by religious certitude. In this strange world, it is heresy to express concern about, for example, climate change . . .

[T]he Republican base requires that candidates tack away from science toward the theistic position — only God controls climate. More to the point, Rush Limbaugh says that climate change is a hoax and so it must be. Huntsman may as well be a Democrat.

It takes courage to swim against the tide of know-nothingness that has become de rigueur among the anti-elite, anti-intellectual Republican base. Call it the Palinization of the GOP, in which the least informed earns the loudest applause.

Even so, there are signs that the GOP is recognizing its weaknesses and is ready to play smarter. To wit: The sudden surge of Gingrich, who, whatever his flaws and despite the weight of his considerable baggage, is no intellectual slouch.

Posted by Michael-in-Norfolk at Saturday, November 19, 2011