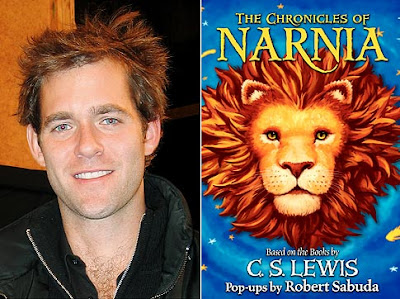 Back in February I wrote about the untimely death of Perry Moore (pictured above), executive producer of the "The Chronicles of Narnia" trilogy and author of the young adult novel "Hero." Moore grew up in Virginia Beach and, as I noted at the time, reading the Virginian Pilot coverage, one would never know that Moore was gay and had a life partner. Not without irony, Moore had noted as follows about growing up in Hampton Roads: “I thought I’d have to kill myself,” he said. “Because I grew up going to church in the south and the pervasive message was that I had this terrible secret that I liked men and consequently I would go to hell for it and ruin my family’s life.”
Now, Hunter Hill, Perry Moore’s partner of seventeen years, and family and friends are in the process of establishing four scholarship funds that will benefit young writers and local Hampton Roads students. The Perry Moore Hero Fund will will award college scholarships to young writers who best express stories of understanding, tolerance and strength within the LGBT community. Next Spring, simultaneous donor gala launches will be held in New York City, where Moore made his home, and in Virginia Beach, where he grew up (details will be forth coming as available). The following is a summary of the scholarship programs being established provided to me by a close family friend, as well as links for information and making donations:

I. The Perry Moore Hero Fund

Tally Sale Banazek established a special account at Camp Chanco to award camper scholarships in Perry’s name on an annual basis at Camp Chanco in Surry, Virginia. The web page to make donations to Camp Chanco in Perry’s memory is http://www.chanco.org/ Please visit the Chanco website and click on “Donate Now.” At the final payment page please indicate the “Perry Moore Scholarship Fund” when you are prompted to add any special instructions to the seller. Alternatively, checks may be sent to Chanco on the James (with the “Perry Moore Scholarship Fund” in the memo line) at P.O. Box 378, Surry, Virginia 23883.

Teacher Pat Hume, along with classmates Bretta Zimmer Lewis, Liza Berkley, and Trisha Shotten instituted the William Perry Moore IV Memorial Award at Norfolk Academy that will be given annually to a tenth grade student. The first award was presented in May of 2011. The recipient was honored with a handsome plaque, Perry's book on the making of The Lion, the Witch, and the Wardrobe, plus DVDs for the three Chronicle of Narnia movies. Pat Hume wrote the inscription on the plaque that hangs in the upper school: “Given annually to a tenth grade girl or boy in honor of Perry Moore '90 whose love of film, language, and literature led him on an incomparable journey of the imagination throughout his life.” The web page to make donations to Norfolk Academy is: https://www.norfolkacademy.org/podium/default.aspx?t=1706&pk=707

Christopher Sawyer, Th.D, and Campus Director as well as the Faculty and Staff of Bryant & Stratton College’s Hampton, Virginia Campus announced the creation of the William Perry Moore IV Scholarship. This scholarship will be awarded each semester, in the amount of $1,000 ($3,000/year), to a student who has overcome extraordinary odds in life and succeeded in the classroom. This scholarship is to be fully funded by the Campus and will be awarded for the Winter, Summer and Fall Semesters.

I take my hat off to Hunter Hill and Perry Moore's friends and family for these charitable endeavors. Having provided the initial endowment for the Hamar/HRBOR Scholarship in honor of my late parents and Hampton Roads Business OutReach ("HRBOR") to benefit local graduating LGBT high school students, I know that these memorial scholarships in honor of Perry Moore will make a lasting impact on many lives over the years.
Posted by Michael-in-Norfolk at Saturday, November 19, 2011