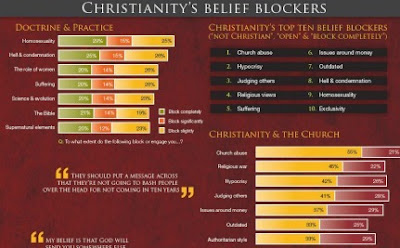 I've looked at the impact of institutionalized homophobia in Christian denominations in the USA in driving people away from Christianity in general. The defection rate among the under 30 age brackets approaches nearly 30%. Now, a study in Australia shows similar events taking place in that nation as well. The unique irony, of course, is that the vitriolic Christians who claim to be saving the churches and society are in fact slowly but steadily killing Christianity. Here are some highlights from Care2 Make a Difference:

The research was commissioned by Christian media group Olive Tree Media, an organization which has grown from the work of Karl Faase, pastor of a Baptist church in Sydney’s southern suburbs. It found nearly nearly 30 per cent of all respondents said the stance of churches on homosexuality blocked them from engaging with Christianity.

This was a greater ‘blocker’ than ‘hell and damnation,’ the Church’s attitude to science and evolution or even the Bible.

The list of the top ten blockers also includes hypocrisy, judging others, religious wars, suffering, issues around money and exclusivity. The survey found that although Australians could separate the perpetrators of sexual abuse from religion, most felt churches needed to do a lot more to address the problem.

“When we asked what impact high profile atheists such as Richard Dawkins and Christopher Hitchens had on people’s beliefs, we were surprised to discover that three out of four said they had had no impact at all,” . . . .

“The biggest turns-offs were public figures or celebrities discussing their faith. Whilst these methods are used in the United States, Australians are seemingly distrustful of the motives behind public declaration of religious beliefs,” McCrindle said.

Most Australians do not actively practice any religion.

Time seems to be decidedly on the side of LGBT equality. One can only hope that the death of Christianity due to the hypocrisy, hate and intolerance of conservative Christians accelerates.
Posted by Michael-in-Norfolk at Monday, November 14, 2011