Young Voters are Wary of Mormons and Evangelicals 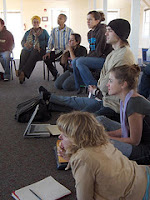 With the Republican Party rapidly transforming into a quasi-religious party, one has to wonder what the party leadership is thinking in terms of long term survival. Yes, elderly voters are the most conservative and consistent voters but truth be told they are dying off - literally. Yet, by embracing religious extremism, the GOP is driving away younger voters who, as the age and vote more consistently will likely avoid the GOP. A new survey by Public Religion Research Institute ("PRRI") contains responses from younger voters that ought to be a wake up call to the GOP if it wants to remain mainstream over the longer term. An article in Religion Dispatches that looks at the survey results explains why. Here are some highlights:

And here is some startling new data: younger voters—the so-called “millenials” aged 18-29—view Mormonism far less favorably than their elders. Fifty-six percent of voters aged 18-29 said they were at least somewhat uncomfortable with the idea of a Mormon president . . .

I spoke to PRRI Director of Research Dan Cox, an expert in youth politics and religion, to get a sense of what might be motivating discomfort with Mormon candidates among millennial voters. According to Cox, millennials are significantly more diverse than older voter cohorts: four in ten millennials are African-American, Latino, or Asian-American. Thanks in part to social media, they also interact with an incredibly diverse range of peers. “They have friends who are immigrants or are from immigrant families. They have friends who are LGBT. This impacts the way they view issues like immigration and LGBT rights,” according to Cox. “They believe that LGBT people are ‘just like me.’”

Millenials are also less likely than older voters to report a religious affiliation: fully one-third report no affiliation at all. “They see the social conservatism of some churches, and they say, ‘if this is what religion looks like, I want no part of it,’” says Cox.

Cox believes that millennial voter aversion to Mormon candidates (evangelicals too scored low marks among 18-29 year olds) may be in reaction to the perceived social conservatism of Mormonism, and particularly its political campaigns against same-sex marriage.

If Cox is right—and it would be great to see subsequent polls gathering qualitative data to confirm these hypotheses—It’s not that millennials hold a prejudicial view of Mormonism as a cult, or discredit our theology. It’s that they object to the Church’s stance on LGBT civil equality.

It's striking that the anti-LGBT mindset of the GOP is one of the strongest factors alienating millenials. Is anyone in the GOP paying attention? I doubt it. They're too busy prostituting themselves to hate groups and extremists.
Posted by Michael-in-Norfolk at Sunday, November 13, 2011