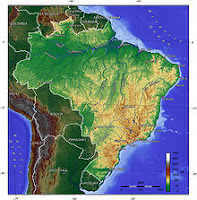 I wrote recently how the highest court in Brazil upheld same sex marriage under the nation's constitution. Now, Brazil has again shown the falsity of America's claim to be the land of liberty and religious freedom. Under DOMA, the USA refuses to recognize valid marriages from foreign counties even though DOMA is nothing more than thinly disguised religious based discrimination writ large in the federal laws (the same religious based discrimination is the sole reason for state anti-gay marriage statutes and/or state constitutional amendments). Brazil in contrast has granted permanent residency to the legally married same sex spouse of a Brazilian national. Would that the USA would live up to the promises of liberty and religious freedom it likes to talk about but fails to make a reality. The Washington Post has coverage and here are highlights:

Brazil’s government for the first time has granted a foreign citizen the right to live permanently in the country based on a same-sex relationship with a Brazilian citizen, according to a notice published Monday in the country’s Federal Register. Spanish man, Antonio Vega Herrera, and his Brazilian partner live in the town of Aracatuba in Sao Paulo state.

The action grows out of an October ruling by country’s Supreme Court that recognized same-sex marriage, giving gay couples the rights such as the ability to jointly file taxes and to jointly adopt a child.

Gay rights activists lauded the new announcement as an important victory. We’re advancing our rights as part of a conversation about democracy in this country,” said Julio Moreira, president of the Rio de Janeiro gay rights group Arco Iris, which means rainbow in Portuguese. “Our constitution says no one should be discriminated against, so we see this in the same terms as the fight against racism and sexism.”

In the United States, same-sex couples that include a foreigner have petitioned for permanent residency based on the relationship, but none so far have been granted the right. A bill pending in U.S. Congress would allow that right.

When it comes to actually delivering equality to all of its citizens, the USA has about the same credibility as the Roman Catholic Church hierarchy lecturing others on protecting children and youths from sexual abuse.
Posted by Michael-in-Norfolk at Tuesday, November 15, 2011