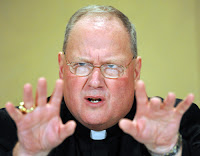 For many years anti-gay (and often anti-many other groups of citizens) organizations have enjoyed the special right of gorging at the government tax dollar trough while openly discriminating against segments of tax paying citizens who through their tax payments are generating the tax dollars enjoyed by such bigots. Time and time again, alleged religious belief has been the ticket to such special privileges. Now, a number of states are very correctly cutting off government funding to such discriminatory organizations, not a few of which are affiliated with the Roman Catholic Church. Facing the loss of their special rights and the loss of lucrative government payments, the U.S. Catholic bishops have jumped whole heartedly onto the bandwagon of liars among the professional Christian set who are knowingly disseminating the falsehood that gay rights - particularly same sex CIVIL marriage - infringe upon their "religious freedom". Stripped of the feigned pious bullshit, what the beef comes down to is the reality that states are finally demanding that the practices of such organizations be brought in line with anti-discrimination laws. And the hogs who have gorged at the taxpayer trough are incensed. The truth is that they are entirely free to practice their beliefs - they just don't get to force taxpayers to subsidize discrimination and bigotry. The Washington Post looks at the crocodile tears and rants emanating for the Catholic bishops. Here are highlights:

The U.S. Conference of Catholic Bishops meets Monday in Baltimore for its national meeting feeling under siege: from a broader culture moving toward accepting gay marriage; a White House they often condemn as hostile to Catholic teaching; and state legislatures that church leaders say are chipping away at religious liberty.

Many Catholic academics, activists and parishioners say the bishops are overreacting. . . . Still, the bishops see themselves as more and more on the losing side of these disagreements . . .

Among the bishops’ top concerns are religious exemptions in states that legalize same-sex marriage. In Illinois, government officials stopped working with Catholic Charities on adoptions and foster-care placements after 40 years because the agency refused to recognize a new civil union law. Illinois bishops are suing the state.

On health care, the bishops have been pressing the Health and Human Services Department during its public comment period for a broader religious exception to the provision in Obama’s health care overhaul that mandates private insurers pay for contraception.

Administration officials note that the vast network of Catholic social service nonprofits, including the bishops’ conference, receives hundreds of millions of dollars in government funding in amounts that have increased in the last couple of years.

At the same time, the bishops’ have been stung by their loss of public influence from the sex abuse crisis and the years of bruising revelations that many dioceses moved guilty clergy among parishes without alerting parents or police.

“The church no longer receives deference or the hands-off attitude that it once had for many years. That’s gone,” Appleby said.

Critics of the bishops view the closer focus on religious liberty as another sign that church leaders are turning inward and away from promoting the church’s teaching on social justice.

The bishops by their own malfeasance and moral bankruptcy in the context of the sex abuse scandal have demonstrated that they deserve no deference whatsoever. Indeed, rather than whining and claiming anti-Catholic discrimination, the bastards ought to be happy that they haven't been criminally prosecuted and put behind bars. And as noted, no one is restricting their right to practice their hate and fear based faith. Many of us are just sick and tired of being forced to subsidize their bigotry. And if money is tight, perhaps Archbishop Dolan and many of his similarly obese brethren can cut back on wine and far too much food and redirect some of the Church's money to the poor and needy.
Posted by Michael-in-Norfolk at Sunday, November 13, 2011