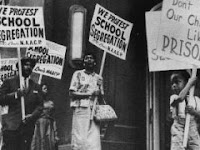 Virginia - which gave the early years of the nation many enlightened and dynamic leaders - has for more than 125 years become a bastion of reactionary thought and embraced discrimination against targeted groups of its citizens. Once it was black Americans and today it is LGBT citizens with Virginia being among the most anti-gay states in the nation. Belatedly, the Richmond Times-Dispatch has expressed regret for its role in defending racial segregation in the years following the Brown v. Board of Education ruling by the U.S. Supreme Court. During that era, many areas of Virginia engaged in "Massive Resistance" and closed their public schools rather than allow them to be integrated. Since it has taken roughly 50 years for the Times-Dispatch to express remorse for its treatment of blacks, I can only ponder how many decades we will have to wait for apologies to the misdeeds done to LGBT Virginians. Here are highlights from the "apology" published yesterday:
*
Sometimes the era seems ancient; sometimes it resembles yesterday. Fifty years ago Virginia had a rendezvous with destiny and came up wanting. It scorned human rights and the promise of the Declaration of Independence and instead took a course known as Massive Resistance. Tomorrow at the Capitol, the University of Virginia's Center for Politics will convene a conference on the chapter and its legacy.
*
Throughout the episode, Richmond Newspapers played a central role -- but not a centering one. The hour was ignoble. Editorials in The News Leader relentlessly championed Massive Resistance and the dubious constitutional arguments justifying its unworthy cause. Although not so intimately engaged, The Times-Dispatch was complicit. The record fills us with regret, which we have expressed before.
*
Hubris prevailed. Those who railed against oppressions visited upon sovereign states by an allegedly imperial Washington relied on government's coercive might to deny the full humanity of their fellow citizens. Massive Resistance was neither a departure nor an exception but the extension of Jim Crow and the attitudes informing it. Segregation and its associated indignities were in retreat. Massive Resistance formed a last stand.
*
Many simply could not see the harm they did to so many others. Jefferson trembled for his country when he reflected that God is just. Yesteryear's words cannot be revoked. They endure on newsprint yellow and brittle, on microfilm, and in the computer files into which they have been translated. They belong to history, and history lives. It is well and good that the words be remembered, as a warning perhaps best. We will not forget.
*
But, of course, Virginia has forgotten and has passed anti-gay statutes and even wrote anti-gay discrimination into its Constitution in 2006. The same hubris and hate is ever present in the likes of many Virginians and organizations: Pat Robertson, Victoria Cobb, Bob "Taliban Bob"McDonnell, Regent University, Liberty University, The Family Foundation, Ken Cuccinelli, break away Virginia Anglicans. The list goes on and on. Somethings in Virginia unfortunately do not change. Virginia has once again had a rendezvous with destiny and came up wanting.
Posted by Michael-in-Norfolk at Friday, July 17, 2009