Thou Shall Not Sponsor a State Religion 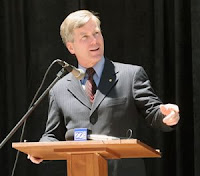 The Christianists and many Republicans - e.g., in Virginia GOP candidates Bob McDonnell and Ken Cuccinelli - consistently try to impose their religious beliefs on all citizens in a direct affront to the Constitution's guarantees of freedom of religion. Their mindset is one of to Hell with everyone else's rights, we want everyone to live by our beliefs, like it or not. Indeed, if they are prevented from inflicting their beliefs on all other citizens,they whine that they are the ones who are victims of discrimination. It is this attitude that underlies all of the anti-gay legislation and discrimination not only in Virginia but across the country. An op-ed piece in the Roanoke Times takes to task this mindset and politicians like Bob McDonnell, Sarah Palin and other religious bigots. Here are some highlights:
*
The question of the separation of church and state and whether the United States is a Christian nation has been of much concern lately. After reading Don Assaid's commentary of June 28, "Where is the tolerance for Christians?" I thought I'd offer a secular view. Assaid thinks that the Christian majority is within its rights under the First Amendment to the Constitution to invoke the Christian God in public meetings or at school. After all, this is a Christian nation, with a Christian majority. But let's take a closer look.
*
Let's be clear, as Assaid is not, because most of us understand that there is an important distinction between demonstrating your religious beliefs at nongovernmental versus governmental functions. Assaid conveniently confuses his role of private citizen and his role as a member of the board of supervisors. He proudly asserts that he is completely indifferent if he offends anyone by praying to the Christian God. And, indeed, as a private citizen he can pray and offend all he wants. But in his role as a government official he is bound by the Constitution to be completely neutral in the matter of religion.
*
It isn't much of a stretch to suggest that the First Amendment means you don't begin your government meeting by an appeal to a belief that may exclude some of your fellow citizens. And while the Founding Fathers may well have begun their governmental business with an appeal in prayer to the Christian God, I would argue that they weren't ready to accept the full implications of the laws they themselves had written into the Constitution. After all, they weren't ready to accept that African Americans should be free, or that women should have the right to vote. But I doubt that the ghost of Mr. Jefferson is upset with how the Constitution has evolved in these matters of equality, justice, suffrage and religion.
*
Jesus taught that there is a distinction between church and state, and that it should be respected. . . . I reread the whole Constitution. What struck me is that nowhere in this foundational document do the words Creator, God, Jesus Christ or Redeemer appear. The only word of religious significance I found in the entire document was "Lord," as in "The Year of our Lord one thousand seven hundred and eighty seven." Does it seem strange that these Christian men did not see the necessity of invoking the Christian God when laying down the fundamental laws of the land? Perhaps they had Jesus's teaching in mind.
*
If you claim that Christians should have some legal advantages, whatever they may be, then do as Assaid suggested, and reread the First Amendment.
*
Of course, the Christianists could care less what the Constitution actually says. It is, after all, all about them and to Hell with everyone else. Their hubris and selfishness knows no limits.
Posted by Michael-in-Norfolk at Friday, July 17, 2009