More Back Sliding by Obama on Repealing DADT? 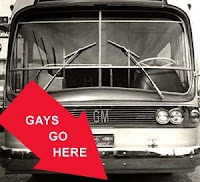 Just last night I posted about the neo-nazi types and racists being recruited into the U.S. military - along with felons and gang members - even as the military discharges on average two LGBT members of the military for being gay. All in essence because of the religious based discrimination that is the real underlying reason for Don't Ask, Don't Tell. As John Aravosis discusses at AmericaBlog.Gay, in an interview with Anderson Cooper, President Obama seems to be signaling that he's about to throw LGBT Americans further under the bus. How so? He is now making noises that DADT is perhaps constitutional just as the Justice Department recently argued in the nefarious DOMA brief a few weeks back. Again, if one looks at the true reason behind DOMA and DADT it is religion plain and simple thus making a mockery of the First Amendment to the U.S. Constitution. Here are highlights from John's piece:
*
In an interview with CNN's Anderson Cooper, President Obama presented several new excuses today as to why he can't do anything on Don't Ask Don't Tell. He also seemed to again signal that he would be pushing to change, rather than repeal, Don't Ask Don't Tell:
*
1) The Don't Ask Don't Tell policy is constitutional, and the president never disobeys a policy that's constitutional. Obama told Anderson: If Congress passes a law that is constitutionally valid, then it's not appropriate for the executive branch simply to say 'we will not enforce a law'. It is our duty to enforce laws. That is, unless he issues a signing statement, as he did the other day, giving notice that the has no intent to obey the constitutionally-valid law because he thinks - thinks - it's unconstitutional.
*
Of course, the big news here is that Obama is now saying he thinks the military's discrimination and bigoted DADT policy is constitutional. You'll recall that in the anti-gay DOMA brief the president said that DOMA is constitutional. And while some said that the president had to say that, even if he didn't believe it, the president did not have to tell Anderson Cooper today that DADT was constitutional. Oh but there's more.
*
2) President Obama specifically told Anderson Cooper that his stop-loss powers don't permit him to retain service members who are leaving the military under a constitutional policy. Neither Joe nor I have ever heard this excuse before, nor are we familiar with anything in the law enacting the Stop-Loss policy stating that Stop-Loss can not be invoked when a service member is being discharged under a policy that is constitutional. Today is the first time the administration seems to pulled this new excuse out of its hat.
*
[T]he promise to repeal DADT was wiped out, but after much consternation from the community, finally came back as a promise to "change" DADT in a sensible manner. After much more consternation, the White House finally went back to the original language, to "repeal" DADT. Subsequently, the president and his top spokesman both suddenly started talking about "changing" DADT, rather than repealing it. The only exception was the White House gay cocktail held a few weeks ago to make amends for the anti-gay DOMA brief debacle.
*
Sadly, it seems increasing that LGBT Americans cannot believe a word that Obama says now about all of his campaign "promises" that were used to secure our votes and money. Once again, the LGBT community needs to turn off the LGBT ATM machine until Obama and the Congressional Democrats deliver enacted pro-gay legislation. The time for promises has passed.
Posted by Michael-in-Norfolk at Tuesday, July 14, 2009