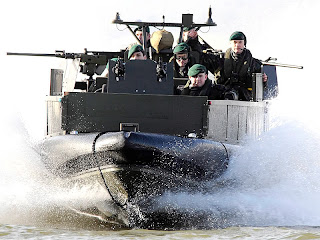 One aspect of too many Americans that I find frustrating is that they never can look to the experience of other nations for examples of making or changing policies. I do not know if the phenomenon is due to egocentric characteristics, plain stubbornness, or the fear that the experience of others will prove their excuses for bigotry as unfounded. The arguments for continuing Don't Ask, Don't Tell are a case in point. The majority of the USA's allies have allowed gays to openly serve in their military forces for a number of years in some cases and none of the problems trumped up by anti-gay psychos like Elaine Donnelly have come to pass. All of which helps to underscore that the REAL reason for DADT is religious based discrimination and nothing else regardless of what the naysayers whine about. 365gay.com has a good article that looks at the experience of three of the USA's allies and - surprise - gays serving openly has not been a problem. Here are a few highlights:
*
(New York) When it comes to dealing with gay personnel in the ranks, the contrasts are stark among some of the world’s proudest, toughest militaries - and these differing approaches are invoked by both sides as Americans renew debate over the Pentagon’s “don’t ask, don’t tell” policy.
*
In the United States, more than 12,000 service members have been dismissed since 1994 because it became known they were gay. Current targets for discharge include a West Point graduate and Iraq war veteran, Army National Guard Lt. Dan Choi.
*
In Britain, on the other hand, uniformed gay and lesbian service members marched in the annual Pride London parade July 4. Gay Australian soldiers and sailors had their own float in Sydney’s Gay Mardi Gras parade. In Israel, the army magazine earlier this year featured two male soldiers on the cover, hugging one another.
*
U.S. Rep. Patrick Murphy, D-Pa., the first Iraq war veteran elected to Congress, has just launched a campaign for a bill to repeal “don’t ask.” He observed British troops in Iraq operating smoothly with a serve-openly policy and bristles at the contention that American forces would suffer morale and recruiting problems if they followed suit. “I take it as a personal affront to our warriors,” he said. “To say that other countries’ soldiers are professional enough to handle this and American soldiers aren’t is really a slap in the face.”
*
With such polarized views as a backdrop, Associated Press reporters examined how the militaries of Israel, Britain and Australia have managed with serve-openly policies, and interviewed partisans on both sides of the debate in the United States about the relevance of those experiences.
*
For those in the U.S. military community who oppose letting gays serve openly, there’s a widely shared sentiment that America has nothing to learn from the two dozen nations that have no bans.
*
“There’s been very little trouble in the nations that lifted their ban,” said professor David Segal, director of the University of Maryland’s Center for Research on Military Organization. “My guess is there will be slightly more in the U.S. - we have a somewhat higher level of intolerance.” However, Segal doubted the change would spur a large exodus or hamper recruitment.
Posted by Michael-in-Norfolk at Thursday, July 16, 2009