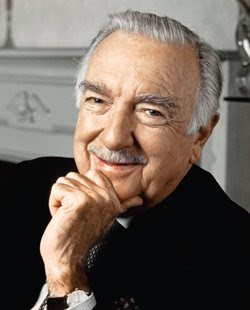 Years ago I had the opportunity to meet and speak with Walter Cronkite at the University of Virginia where he was one of the Student Legal Forum's guest speakers. He was amazing and thus, like many, I am saddened to hear of his passing yesterday He was indeed a news and journalism legend who in many ways set the standard for how news and journalism should be done. Unfortunately, those standards are increasingly rare in network and cable news not to mention most newspapers. In many ways, Cronkite's standards now only exist in the blogosphere. If we had more Cronkites and true investigative reporters today, this country may well have avoided the disaster of the Iraq War and eight years of the Chimperator and Emperor Palpatine Cheney.
*
I was not yet ten years old when Cronkite became the CBS evening news anchor and he literally was a daily part of my life growing up as we watched the evening news - often with conflicting opinions between family members erupting on any number of issues, particularly the student unrest in the late 1960's and Vietnam. I recall Cronkite's reporting the day John F. Kennedy died and in respect to so many other momentous events. In some ways, Cronkite helped me to develop into a news junkie and meeting him was a truly awesome experience. One surprise was that he was much shorter than I had pictured him because he seemed so much larger than life on television. It was a different era and I suspect many of today's youth have no concept of the level of authority Cronkite commanded.
*
The New York Times as a brief piece with some comments by the president of CBS which conveys Cronkite's uniqueness:
*
“There probably will never be anybody who has the presence and the stature and the importance that Walter Cronkite had in this country,” Mr. McManus said in a telephone interview, recalling what he told his children. “I tried to explain to them that most people in America expected to get both good and bad news from one man, and that was Walter Cronkite,” he said. “That will never be duplicated again,” because of the fragmentation of the media.
*
Mr. McManus sensed that his children had a hard time comprehending what he meant. “It’s really hard,” he acknowledged, “to remember just how influential and important he was.” He cited Mr. Cronkite’s famous declaration that the Vietnam war would end in a stalemate.
*
A little more than a year ago, Mr. Cronkite paid a surprise visit to the news headquarters. Even the interns who weren’t yet born when Mr. Cronkite was anchor were “literally looking up to him,” Mr. McManus said. “When he walked in the newsroom, it was like Thomas Jefferson walking into a history class at a university,” he said.
Posted by Michael-in-Norfolk at Saturday, July 18, 2009