Palin Has Become The Face of the GOP 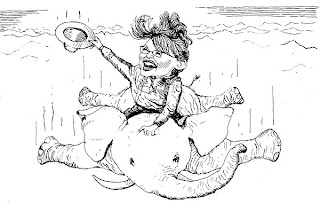 As a former Republican from a family of former Rockefeller Republicans, I continue to be amazed by the apparent death wish today's GOP seems to have embraced. While ignorance, anti-gay bigotry and outright racism may play well with the party base, it is making the party increasingly radioactive to the majority of voters. In deed, moderates Republicans have abandoned the party in droves and the younger generation is more and more tilted towards the Democrats yet the GOP strives to become crazier and crazier bot a the state level - think Sally Kern in Oklahoma - and the nationally level - think queen of the crazies, Sarah Palin. One truly has to wonder whether the GOP will survive as a national party if Palin is its most prominent torch bearer. Frank Rich has a column that looks at the phenomenon. Here are some highlights:
*
There was nothing strange about her decision to quit in midterm, Palin told America. What’s strange — or “insane,” in her lingo — are the critics who dare question her erratic behavior on the national stage. . . . Palin’s combative resignation soliloquy, though much mocked by prognosticators of all political persuasions, has an equally vociferous and more powerful constituency.
*
In the aftermath of her decision to drop out and cash in, Palin’s standing in the G.O.P. actually rose in the USA Today/Gallup poll. No less than 71 percent of Republicans said they would vote for her for president. That overwhelming majority isn’t just the “base” of the Republican Party that liberals and conservatives alike tend to ghettoize as a rump backwater minority. It is the party, or pretty much what remains of it in the Barack Obama era.
*
That’s why Palin won’t go gently into the good night, much as some Republicans in Washington might wish. She is not just the party’s biggest star and most charismatic television performer; she is its only star and charismatic performer. Most important, she stands for a genuine movement: a dwindling white nonurban America that is aflame with grievances and awash in self-pity as the country hurtles into the 21st century and leaves it behind.
*
The essence of Palinism is emotional, not ideological. Yes, she is of the religious right, even if she winks literally and figuratively at her own daughter’s flagrant disregard of abstinence and marriage. But family-values politics, now more devalued than the dollar by the philandering of ostentatiously Christian Republican politicians, can only take her so far. The real wave she’s riding is a loud, resonant surge of resentment and victimization that’s larger than issues like abortion and gay civil rights.
*
That resentment is in part about race, of course. . . . She stood for the “real America,” she insisted, and the identity of the unreal America didn’t have to be stated explicitly for audiences to catch her drift. . . . The latest flashpoint for this kind of animus is the near-certain elevation to the Supreme Court of Sonia Sotomayor . . . Those maligning the long and accomplished career of an Ivy League-educated judge do believe in affirmative-action — but only for white people like Palin, whom they boosted for vice president despite her minimal achievements and knowledge of policy, the written word or even geography.
*
Nowhere is the power of resentment to trump reason more flagrantly illustrated than in the incessant complaint by Palin and her troops that she is victimized by a double standard in the “mainstream media.”
*
Those Republicans who have not drunk the Palin Kool-Aid are apocalyptic for good reason. She could well be their last presidential candidate standing. Such would-be competitors as Mark Sanford, John Ensign and Newt Gingrich are too carnally compromised for the un-Clinton party. . . . . Were Palin actually to secure the 2012 nomination, the result would be a fiasco for the G.O.P. akin to Goldwater 1964, as the most relentless conservative Palin critic, David Frum, has predicted.
*
It’s more likely that she will never get anywhere near the White House, and not just because of her own limitations. The Palinist “real America” is demographically doomed to keep shrinking. . . . . These are the cries of a constituency that feels disenfranchised — by the powerful and the well-educated who gamed the housing bubble, by a news media it keeps being told is hateful, by the immigrants who have taken some of their jobs, by the African-American who has ended a white monopoly on the White House. Palin is their born avatar.
Posted by Michael-in-Norfolk at Sunday, July 12, 2009

Michael, you should check out her Facebook and Twitter pages. Holy crap her supporters are something else, man! I keep reading things on her Facebook page from her fans saying she's just what America needs, and she has sunshine coming out of her holy golden asshole, and worse yet, many people say things like they don't care about what she knows about policy, foreign affairs, etc., they just care that she's a good, moral person. Holy shit! I have no problem with someone being good and moral, but they need some sort of basic foundation besides that to build upon. Would her supporters use that same "logic" in picking a lawyer, dentist, doctor, plumber or even a preacher? I can hear it now, "I don't care what Dr. Axelrod knows or if he knows anything as long as he's a good, moral person." It just doesn't make any sense. These people put more thought into picking an auto mechanic that they do in picking a POTUS. Un-fucking-real. These are the people, for the most part, who think gay people should have less rights than the rest of us. It's scary, but this is what we who support gay rights, and gay people themselves, are up against. You can't reason with unreasonable people.

Hey, if you're on Twitter look me up. I have updates on my blog too. I'm under zirgar. Peace!

Being Republican use to be something to be proud of.

I haven't felt that way since Reagan left office.

Although, I continued to vote Republican until this last election, I'm thinking very seriously of going to City Hall and changing my party affiliation.

So I will have gone from a Reagan Democratic to Republican and back again.

As they say, the roosters eventually come back to roost.