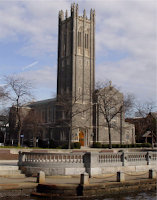 As 365gay.com is reporting, in a further development that will likely cause the homo-haters in the Anglican Communion to go utterly berserk, the Episcopal Church has gone a step further beyond allowing gay bishops: the bishops voted by nearly 3 to 1 margin to authorize the development of theological resources and liturgies for blessing same-gender relationships, which would be considered at the next national meeting in 2012. Here are some story highlights:
*
The resolution notes the growing number of states that allow gay marriage, civil unions and domestic partnerships, and gave bishops in those regions discretion to provide a “generous pastoral response” to couples in local parishes.
*
Many Episcopal dioceses already allow clergy to bless same-sex couples but there is no official liturgy for the ceremonies in the denomination’s Book of Prayer. The measure still needs the approval of the lay people and priest delegates at the assembly, which ends Friday.
“We certainly feel a deep need to be able to proclaim the love of God in the midst of a changing reality,” said Suffragan Bishop James Curry of the Diocese of Connecticut, one of six states that are legalizing same-gender marriage.
*
A day earlier, the convention had declared gays and lesbians eligible for “any ordained ministry,” even though Anglican leaders had sought a clear moratorium on consecrating another gay bishop.
*
Most overseas Anglicans believe Scripture bars same-sex relationships and disagree with how liberals interpret the Bible on a wide range of issues. Liberal Anglicans emphasize biblical social justice teachings and believe their fellowship can contain conflicting views.
*
A reader from Newsy.com (thanks Rosa!) sent me a link to the video below that looks at the controversy within the Anglican Communion that sums up the opposing views and invites comments.
*
Personally, I believe that ultimately in the western world, gay acceptance will likely lead to the potential for church growth. My children's generation increasing accept and/or support gays and gay marriage. Denominations that refuse to accept societal changes and modern medical and mental health knowledge set themselves up to lose the younger generation and those that will come after them. Yes, the anti-gay mindset of the African Anglicans may succeed for a while, but as education increases and ignorance declines, hate and intolerance will become increasingly unmarketable.
*
I also believe that this move by the Episcopal Church will add to the pressure on other denominations to change their policies on gay clergy and blessing gay relationships. A case in point is the Evangelical Lutheran Church in America which votes on these issues next month. Should the ECLA vote down these changes, I for one might feel the need to make a switch to the Episcopal Church where I know that I am officially welcome and my relationship with the boyfriend is seen as legitimate. As for gay former Catholics, the Episcopal Church will now offer a religious home where one is not labeled as "intrinsically disordered."

You are indeed welcome in the Episcopal Church, Michael; so is everyone. You are welcome in your Gayness, your parenthood, your faith and your questions.

An ELCA friend of mine is very involved in lobbying his church's national convention (called synod, I believe) on LGBT personhood, membership and dignity, and the longterm outlook is good, but the shortterm progress is much slower. The progressives aren't winning the votes yet, just getting closer each time. The Episcopal Church has a long and checkered history (two steps forward, one step back), but now progressives consistently win every vote 2-1 or more.

I do hope GLBTs who love Jesus but despise churches will take another look at progressive places like the Episcopal Church. The fact is that belonging to a faithful community is much better for the soul than going it alone; people are social animals and we benefit from giving and receiving support.