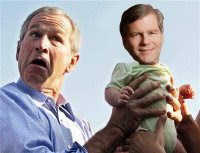 As I wrote just yesterday, the main stream media continues to allow political candidates and politicians to sidestep the truth by never asking serious probing questions. Too often newspapers and brainless news anchors merely repeat whatever story line is released to them without ever asking (1) is it the truth or (2) what is being omitted. A case in point is GOP candidate for GOP governor Bob "Taliban Bob" McDonnell who is a wolf in sheep's clothing as he markets him self as a "moderate." No one in the main stream media seems to have the balls to ask him hard questions on social issues - if they did, they'd have to report that McDonnell is somewhere to the far right of Attila the Hun. The Virginia Democrat has a piece that looks at this very phenomenon and one has to question when will Creigh Deeds do something to expose McDonnell's extreme Christianist views and desire to police citizens' bedrooms. Do Virginians really want Pat Robertson, James Dobson and the ghost of Jerry Falwell setting policy and legislating social policy through their puppet McDonnell? Here are some highlights:
*
Bob McDonnell does not want to talk about his views on social issues, specifically abortion and gay marriage, because those views reveal him as an extremist who would use the power of the government to deny basic civil rights to American citizens. The election in November ought to tell us whether this is what Virginians want from their Governor, but that will happen only if McDonnell is forced to discuss his views in detail.
*
The mainstream media, which still for the most part controls communication between candidates and political office, ought to aggressively force him to do so. Indeed, the media has an obligation to so.So far, the media in the Commonwealth has given him a free ride on these matters.
*
Mr. McDonnell opposes a woman’s right to choose even in cases of rape and incest, even in cases involving the health of the mother – the most extreme position. Why? Well, perhaps the fact that public support nationwide for that position hovers around 15-17%, according to recent polling.
*
As for gay rights, Mr. McDonnell’s website sates, “Bob McDonnell believes marriage is the union between one man and one woman.” Fair enough.But several years ago, Mr. McDonnell sought to block the reappointment of a Newport News Circuit Judge named Verbina Askew because she was allegedly gay. McDonnell, of course, is not an idiot. He went to great pains to assert that the judge’s sexual orientation did not matter to him; rather, the fact that she may have violated Virginia anti-sodomy statute in force at the time, which prohibited oral and anal sex, was a factor to consider in her reappointment.
*
Said McDonnell at the time, “It [possible sodomy] certainly raises some questions about the qualifications to serve as a judge."McDonnell also said, "There is certain homosexual conduct that is in violation of the law," McDonnell said. "I’m not telling you I would disqualify a judge per se if he said he was gay. I’m talking about their actions."(Incidentally, this was the context for the infamous incident in which Mr. McDonnell was asked whether he had ever violated the statute, and he hilariously responded, “Not that I can recall.”)Look, the issue here is not hypocrisy. Rather, the issue is that Bob McDonnell, and there is no nice way to say this, is a bigot.
*
More to the point, where does Mr. McDonnell stand today on these issues? Would he still deny a homosexual a seat on the Bench because of his or her sexual orientation, regardless of the crazy excuse he uses to justify his action, like alleged violation of an anti-sodomy statute. Would Mr. McDonnell deny a gay Virginian a job in his administration, or a job for the Commonwealth, for which they were otherwise qualified?
*
When I came out after eight years on the Virginia Beach City Committee, the treatment I received from Mr. McDonnell was beyond nasty. Moreover, McDonnell has yet to explain why he covered up for former Congressman Ed Schrock's use of Mega Phone to set up gay sex trysts. McDonnell knew about it for over seven months before Mike Rogers outed Schrock. When will the media start doing its job?
Posted by Michael-in-Norfolk at Sunday, July 19, 2009

You may want to dive deeper into his family background... his wife and his former brother-in-law (who is now a woman)... i believe his wife may have had an abortion many years ago... and the brother in law has now made the change to female, even legally changing his name... not sitting well with that family and she will tell you about it, if asked...