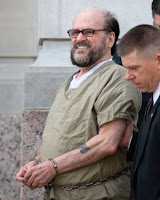 Why is it that it seems the main people one sees either cheating on their wives or getting busted on sex charges are Republican "family values" politicians and professional Christians who make comfortable livings fleecing the sheeple? The latest Professional Christian to receive a "go to jail" card is Tony Alamo who it seems has a taste for under age girls - in one case as young as nine. That's beyond sick. True, I know that infidelity goes on among liberals and secular folk, but they don't engage in the rank hypocrisy of the closed zipper challenge GOP politicos and professional Christians. As one who cannot stand hypocrisy, it's good to see hypocrites like Alamo go down. Personally, the sooner more Christianist frauds like Tony Perkins, James Dobson, Lou Engle, et al, are exposed the better off society will be. Here are highlights on Alamo's conviction from The Times-Picayune:
*
Tony Alamo, a one-time street preacher who built a multimillion-dollar ministry and became an outfitter of the stars, was convicted Friday of taking girls as young as 9 across state lines for sex.
*
Alamo stood silently as the verdict was read, a contrast to his occasional mutterings during testimony. His five victims sat looking forward in the gallery. One, a woman he "married" at age 8, wiped away a tear. "I'm just another one of the prophets that went to jail for the Gospel," Alamo called to reporters afterward as he was escorted.
*
The jury of nine men and three women took about 11 hours to consider the charges against Alamo. The 10-count federal indictment accused him of taking his underage "wives" across state lines as early as 1994.
*
Jury foreman Frank Oller of Texarkana, Ark., said jurors deliberated more than a day only to ensure they considered everything. The testimony convinced them the 74-year-old evangelist kept the girls as sexual partners, not office workers as his defense team claimed. "That was the evidence. That was proven," Oller said. "We came up with a full decision that we are quite satisfied with."
*
U.S. Assistant Attorney Kyra Jenner said Alamo's conviction would end his cycle of abuse, as he told his followers God instructed him to marry younger and younger girls. . . . Defense lawyers said the government targeted Alamo because it doesn't like his apocalyptic brand of Christianity.
*
Alamo, who founded the ministry with his wife Susan in the 1960s, remained defiant during the trial. He blurted out a reference to the Branch Davidian raid at Waco, Texas, muttered expletives during testimony and fell asleep even while alleged victims were testifying.
*
It continues to baffle me how people can be brainwashed into believing that the mouth pieces for the Christianists organizations speak for God when in reality they what they really thirst for power, control and most importantly money.
Posted by Michael-in-Norfolk at Saturday, July 25, 2009