The Boyfriend - The Wonders of a Committed Relationship 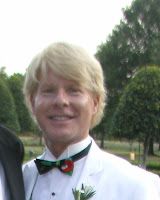 Yesterday was the boyfriend's birthday and today is our anniversary of our first date after knowing each other socially for about five years. Since we have been a couple he has brought me so much happiness and given me so much love. I hope I have given him the same sense of wonder and well being in return. After a long marriage and prior same sex relationships, I feel that I have finally found "the one" who loves me for me and who I am - he asks for nothing in return except my love and faitfulness. He is truly a kind, loving and sweet man and he means more to me than he will ever know. Our relationship should be celebrated and supported by society.
*
The irony, of course, is that the "family values" crowd and professional Christian set say that relationships like ours do not exist and/or that if we are allowed to marry - which we will likely do at some point even though it will not be recognized in antediluvian Virginia - somehow heterosexual marriages will be destroyed. Meanwhile, having lived in a straight marriage in a supposedly model neighborhood I know full well that we have a far better and more loving relationship that the majority of straight couples had in that picture perfect neighborhood where all kinds of dysfunctionalities went on behind the facades of the beautifully tended houses.
*
I am so lucky to have the boyfriend in my life and I than God for bringing us together. He is a sweetheart and I want to thank him for loving me and being my safe harbor.
Posted by Michael-in-Norfolk at Thursday, July 23, 2009

Congratulations, and many happy returns togethe!

It may seem like an insurmontable time to wait, but eventually after every major storm a rainbow does appear.

Enjoy yours, everyone is not always in the right place to view one.

Congratulations! I'm happy for you both.