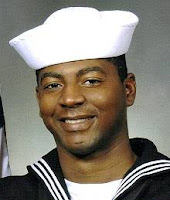 I have posted previously about the violent murder of Seaman August Provost (pictured at left) at Camp Pendleton, California and the rumors and speculation that his death might have involved a hate crime. Finally, an arrest has been made although the Navy is claiming that there was no evidence that the killing was a hate crime - not that the Navy would be likely to admit it even if a hate crime had occurred. As time goes by perhaps we will learn more as to the real circumstances. Here are some highlights on the arrest from the San Diego Union-Tribune:
*
SAN DIEGO – A sailor has been charged with fatally shooting and burning a gay serviceman last month at Camp Pendleton, but Navy officials said Thursday it was part of a crime spree not related to the victim's sexual orientation. Prosecutors accuse Petty Officer 2nd Class Jonathan Campos of killing Seaman August Provost during an arson attack against the compound of Assault Craft Unit 5 on June 30, said Capt. Matt Brown, a spokesman for Navy Region Southwest. Brown again stressed that there's no evidence of a hate crime or gang-related activity.
*
Campos, 32, of Lancaster, faces 16 charges, including murder, arson, unlawful entry, theft of military property and wrongful possession of a firearm. He also is charged with soliciting a civilian in San Diego to murder another sailor the day after Provost's killing. Brown said Campos and Provost served in the 500-member assault craft unit, whose members are trained to pilot jet-powered hovercraft onto beaches for amphibious operations. They likely had met before, he said, but there's no evidence to suggest they knew each other well.
*
Sometime before 3:30 a.m., Navy officials allege, Campos approached the guard shack, shot Provost several times and stole his 9mm Beretta service pistol. Campos then allegedly set fire to the shack – with Provost's body still inside – using gasoline and a lighter. “He apparently did it to destroy evidence,” Brown said.
*
Campos also is accused of planning to set fire to one of the unit's landing craft, but he never made it into the compound. Brown didn't specify why Campos became a suspect, but he did say that Campos failed to show up for work before being arrested July 1. The defendant is being held at the Miramar Naval Consolidated Brig.
*
Provost's death has prompted concerns from gay-rights leaders and some of his family and friends who believe he might have been killed because of his sexual orientation. Gay activists held a candlelight vigil July 10 near Camp Pendleton's main gate. On Thursday, Provost's aunt said she's still not sure what to think about the killer's motive. “We just want justice to be done, and we hope to one day understand why the killer would target someone as good and responsible as my nephew,” said Rose Roy of Beaumont, Texas.
*
The whole matter seems very strange and like Provost's aunt, I'm not sure what to think of the information released so far.
Posted by Michael-in-Norfolk at Friday, July 24, 2009