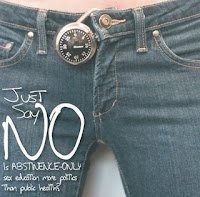 A new Centers for Disease Control reports indicates that during the Chimperator's delusional reign when evangelicals drove sex education policy unwanted pregnancies and the transmission of STD's increased - in some case markedly. Sticking one's head in the sand and rejecting positive programs that have proven effective elsewhere is one of the signature idiocies of the Christianists. Science and objective reality are thrown in the trash bin as religious zealotry dictates all policy. Nor surprisingly, the Bible Belt region had the highest incidences of pregnancies and new HIV cases on a per capita basis. I hope Richard Land of the Southern Baptist Convention and the other professional Christians are proud of their handiwork. The larger public needs to roundly condemn the education policies of these flat earth types and let their elected officials know that they support a fact based comprehensive sex education policy in the schools. Here are some highlights from the Guardian:
*
Teenage pregnancies and syphilis have risen sharply among a generation of American school girls who were urged to avoid sex before marriage under George Bush's evangelically-driven education policy, according to a new report by the US's major public health body. In a report that will surprise few of Bush's critics on the issue, the Centres for Disease Control says years of falling rates of teenage pregnancies and sexually transmitted disease infections under previous administrations were reversed or stalled in the Bush years. . . . The number of Aids cases in adolescent boys has nearly doubled.
*
The CDC says that southern states, where there is often the greatest emphasis on abstinence and religion, tend to have the highest rates of teenage pregnancy and STDs.
*
Although the CDC does not attribute a cause, groups that support comprehensive sex education have seized on the report as evidence of the failure of religiously-driven policies that shy away from teaching about contraception in favour of emphasising avoiding sexual contact. Planned Parenthood said the CDC report is "alarming" and confirms that teenagers need "medically accurate, age-appropriate, comprehensive sex education".
*
The Christian Taliban has no place in setting sex education policy in the public schools. Ignorance is not the way to reduce unwanted pregnancies and STD's.
Posted by Michael-in-Norfolk at Tuesday, July 21, 2009

This is ironic considering Bush was a conservative.

One result of the emphasis on "Just Say No" appears to be that teenagers have actually re-defined just what constitutes sex, or, rather, full blown sex. In a study I read a couple of years ago (don't remember by whom) only vaginal intercourse was considered taboo in terms of the Just Say No dictum. This leaves a wide range of sexual activities that teens can engage in without, presumably, feeling that they have violated the "JSN" bullshit. And this attitude, of course, leaves a broad range of sexually transmitted diseases ready to be transmitted.