Losing My Religion for Equality 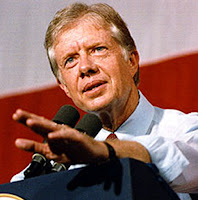 "Losing My Religion for Equality" is the title of a new piece by former President Jimmy Carter who has decided to sever his ties with the Southern Baptist Convention ("SBC") because of its anti-equality mind set. The SBC has become increasingly anti-knowledge, anti-public schools, anti-gay and seeks to keep women as inferiors - the old barefoot and pregnant role more or less. Indeed, as the SBC's mentality has come to increasingly mirror the theocratic model of the Taliban except for violence against those who non-conform, more Baptists that I know are leaving the SBC. That the SBC is big on discrimination should be no surprise since historically the denomination came into being when it split from the northern Baptist church denomination which supported the abolition of slavery. Here are some highlights from Carter's essay:
*
I HAVE been a practising Christian all my life and a deacon and Bible teacher for many years. My faith is a source of strength and comfort to me, as religious beliefs are to hundreds of millions of people around the world. So my decision to sever my ties with the Southern Baptist Convention, after six decades, was painful and difficult. It was, however, an unavoidable decision when the convention's leaders, quoting a few carefully selected Bible verses and claiming that Eve was created second to Adam and was responsible for original sin, ordained that women must be "subservient" to their husbands and prohibited from serving as deacons, pastors or chaplains in the military service.
*
This discrimination, unjustifiably attributed to a Higher Authority, has provided a reason or excuse for the deprivation of women's equal rights across the world for centuries. At its most repugnant, the belief that women must be subjugated to the wishes of men excuses slavery, violence, forced prostitution, genital mutilation and national laws that omit rape as a crime.
*
The carefully selected verses found in the Holy Scriptures to justify the superiority of men owe more to time and place - and the determination of male leaders to hold onto their influence - than eternal truths. Similar biblical excerpts could be found to support the approval of slavery and the timid acquiescence to oppressive rulers.
*
The truth is that male religious leaders have had - and still have - an option to interpret holy teachings either to exalt or subjugate women. They have, for their own selfish ends, overwhelmingly chosen the latter. Their continuing choice provides the foundation or justification for much of the pervasive persecution and abuse of women throughout the world. This is in clear violation not just of the Universal Declaration of Human Rights but also the teachings of Jesus Christ, the Apostle Paul, Moses and the prophets, Muhammad, and founders of other great religions - all of whom have called for proper and equitable treatment of all the children of God. It is time we had the courage to challenge these views.
*
While Carter does not address the issue of sexual orientation, the same analysis holds true in terms of selectively parsing Bible passages in order to justify non-equitable - indeed down right hateful - treatment of others.
Posted by Michael-in-Norfolk at Tuesday, July 21, 2009