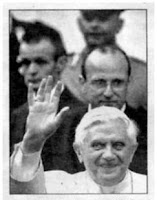 For an institution so plagued by corruption and sexual misdeeds by its clergy, one would think the Roman Catholic Church would tend to cleaning up its own house before it involves itself meddling in the lives of same sex couples, but such is not the case. Moreover, with its ban on divorce, the Church makes it all too evident that it puts little real value on mutual love and respect in marriage. It instead prefers that couples stay in dysfunctional and miserable marriages - unless, of course one is wealth and socially prominent and can buy an annulment - regardless of how damaging they may be for all members of the family. Growing up, I had a number of friends whose parents should have divorced for the benefit of their children but never did because of the Church's ban on divorce.
*
The psychopathy against same sex marriage is particularly strong among the far right lunatic elements of the Church. Currently, the extremely whacked out Catholic Church affiliated American Society for the Defense of Tradition, Family and Property ("ASDTFP") is waging a three state campaign against gay marriage. Moreover, the group is disseminating the same tired fabricated justifications against gay relationships used by Family Research Council and similar professional Christian groups that make a substantial part of their revenues from peddling anti-gay hatred. Unlike some, the ASDTFP is at least about the real underlying reason for the campaign against gays - which shows the group's utter contempt for the religious freedoms of other citizens:
*
10. It Offends God This is the most important reason. Whenever one violates the natural moral order established by God, one sins and offends God. Same-sex “marriage” does just this. Accordingly, anyone who professes to love God must be opposed to it.Marriage is not the creature of any State. Rather, it was established by God in Paradise for our first parents, Adam and Eve. As we read in the Book of Genesis: “God created man in His image; in the Divine image he created him; male and female He created them. God blessed them, saying: ‘Be fertile and multiply; fill the earth and subdue it.’” (Gen. 1:28-29)
*
Funny thing is that I don't recollect asking God to make me gay, so it must be that God had a purpose in doing so. Unlike the ASDTFP, I do not pretend to know more than God or to "put God in a box" thereby telling God what's right and what's not. The ASDTFP is not short on hubris if nothing else.
*
One Maine resident - Maine is one of the targeted states - well states what legislators and the media ought to be saying to the the Roman Catholic Church and its mouth pieces. Of course, as I've discussed before, the main stream media through its laziness and refusal to ask hard questions is complicit in disseminating the many untruths of the Christianists and groups like ASDTFP. Here are some highlights of this heterosexual resident's retort in the Kennebec Journal:
*
As one raised as a strict Catholic, it is highly distressing though not very surprising to me that Marc Mutty and the Roman Catholic Diocese of Portland are so willing to spearhead efforts to repeal our new law allowing gays to marry (Morning Sentinel, July 9). This seems to be an obvious and transparent attempt to seize what they must consider the "moral high ground" in this debate and erase memories in the minds of the general public of their recent sex scandals. Fresh from paying millions in reparations to the victims of their pedophile priests and after years of reluctant admissions of guilt, this is an understandable yet still scurrilous ploy.
*
Far better that they should continue to clean their own house and seek out other still silent victims of the damaging abuse caused by the failed policy of celibacy among their clergy. I would suggest this include not just the pedophiles but those having sex with other adults as well.
*
I can only hope this repeal campaign will be seen by the fair-minded people of Maine as the hypocritical and mean-spirited exercise that it is. As a longtime married heterosexual, I plead with others of my orientation to reject this divisive and unfair attempt to deny others this important right that we enjoy, and soundly defeat this repeal effort in November.
Posted by Michael-in-Norfolk at Sunday, July 19, 2009