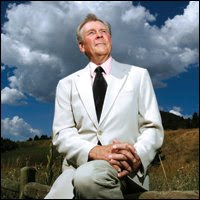 Even before I inadvertently become an activist of sorts back in 2003 when I collaborated with a client and Wayne Besen to expose high profile "ex-gay" Michael Johnston as a fraud, I followed a number of Christianist and "ex-gay" organizations' websites so as to "know what the enemy was up to." It soon became evident that many of the falsehoods and lies disseminated literally daily by these groups trace their roots back to Paul Cameron's bogus "research." Cameron (pictured at left) has a lengthy history of deliberately falsifying research, and misusing peer reviewed articles and misquoting legitimate research.
*
Even though Cameron has been thoroughly exposed as a fraud and liar by legitimate medical and mental health associations, people like Tony Perkins, Robert Knight, James Dobson and many other Christianists continue to knowingly repeat the same old lies but without citing Cameron as the source of the "research." Some are even more dishonest. Peter LaBarbera claimed in an e-mail to me back in August, 2003, that he had no knowledge of (i)Cameron being thrown out of the APA and other legitimate state and national organizations nearly 25 years ago, (ii) Cameron having stated in at least one newspaper interview what he was going to report and how he would use it against gays BEFORE he did his supposed research, or (iii) Cameron's use of convicted sex offenders as his study sample, which he then reporting as a scientific sampling of the general gay population.
*
Among the false information that Cameron has put out over the years is the following (a full expose on Cameron can be found here. I have corroborated the facts myself previously):
*
**Out of all the mass-murders in the US over the past seventeen years, homosexuals killed at least 68% of the victims.
**Homosexuals perpetrate between a third and a half of all recorded child molestations.
**37% of homosexuals engage in sado-masochism.
**29% of homosexuals urinate on their partners.
**17% ingest human feces.
**The average life span of a homosexual is 39 years; fewer than 2% survive to the age of 65.
*
Cameron has also argued that the extermination of homosexuals should also be considered a "viable option." At the 1985 Conservative Political Action Conference, Cameron announced to the attendees, "Unless we get medically lucky, in three or four years, one of the options discussed will be the extermination of homosexuals. "According to an interview with former Surgeon General C.Everett Koop, Cameron was recommending the extermination option as early as 1983.
*
The fact that the Christian Right and some Catholic groups will knowingly cite such vile and untrue information speaks volumes about them. It proves that they are false Christians and that they must be continually challenged and exposed. Unfortunately, the main stream media doesn't have the courage or balls to do it. Therefore, it is important that LGBT Americans do their homework and be able to refute the lies. Recently, America Blog, Pam's House Blend and Holy Bullies and Headless Monsters have reiterated this fact. Cameron and those who use him as a credible "expert" are liars plain and simple.
Posted by Michael-in-Norfolk at Saturday, July 25, 2009