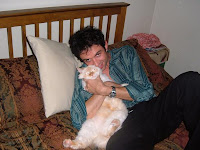 I received a call late yesterday from my ex-partner (pictured at left with a cat we used to have) letting me know that his father had died. Since I lost my father nearly three years ago now, I know how losing a parent hurts one to the core. Those who have not lost a parent - or a sibling as I did in 2001 - cannot understand the feeling not matter how they might try to empathize. My sincerest condolences go out to my ex-partner and his entire family.
*
My former partner's dad was a character as well as a talented musician. Years ago he wrote some country western songs that went on to be quite famous. Unfortunately, as a young writer he had sold them cheap without reserving any rights and as a result he never realized the fame he might otherwise have achieved. I still recall one family reunion I attended where my former partner's dad, some of his sisters and some other family members pulled out their guitars and sang a number of songs - they truly sounded almost professional.
*
Max, may you rest in peace.
Posted by Michael-in-Norfolk at Friday, July 24, 2009

Email ThisBlogThis!Share to TwitterShare to FacebookShare to Pinterest
Labels: former partner, gay relationships, loss of a loved one, loss of a parent