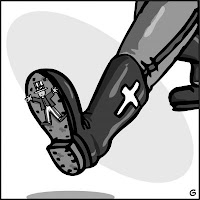 As several bloggers have noted, a number of the leading anti-democracy, Christian Right organizations that seek political and worldly power rather than honestly preaching the Gospel message have joined together to form the inappropriately named the "Freedom Federation." This group, which the Washington Post as describes as a direct descendant of the Moral Majority, the Christian Coalition and Values Voters, includes all of the leading gay-hating demagogues and seems to represent an attempt on the part of these Uber-Christians to regain lost political power now that the GOP is imploding - largely because it embraced these very enemies of religious freedom and knowledge. Without a doubt LGBT Americans will remain one of their favorite targets as they try to eek out more donations in these challenging economic times. Here are highlights from the Post story:
*
Founders say the new group will have a broader membership and a kinder, gentler, more nonpartisan approach than its ancestors. "The stereotypical media-exacerbated image of the angry white evangelical will be replaced by an evangelical movement that will reconcile uncompromised values of compassion, truth with mercy, and righteousness with justice," Rev. Samuel Rodriguez, president of the National Hispanic Christian Leadership Conference, told reporters last week. We shall see.
*
But what's most interesting about the Freedom Federation isn't who's participating. It's the conspicuous absence of evangelical America's three most influential organizations -- Focus on the Family, the National Association of Evangelicals, and Rick Warren's Saddleback Church network, . . .
*
The Freedom Federation seems to be making an effort to broaden its white, evangelical Protestant base by adding the National Hispanic Christian Leadership Conference and Catholic Online to the mix. But the roster is filled with such culture war veterans as the American Family Association (Donald Wildmon), Eagle Forum (Phyllis Schlafly), the Family Research Council (Tony Perkins) and the Traditional Values Coalition (Lou Sheldon). (EDITOR'S NOTE: TVC has been identified as a hate group by the Southern Poverty Law Center).
*
[The] core shared values, found in the new group's Declaration of American Values, reads more like the Republican Party platform than the Sermon on the Mount. For example, it calls on Christians to oppose progressive tax systems and "to encourage economic opportunity, free enterprise, and free market competition." It also includes opposition to abortion and homosexuality (emphasis on gay marriage) and support for the Second Amendment, the Ten Commandments ("the freedom to acknowledge God through our public institutions") and the U.S. military. The new grouping also seems to oppose health care reform and hate crime penalties.
*
In my opinion, the Freedom Federation is merely an effort to put lipstick on a pig. Hopefully, more and more Americans are waking up to the toxicity of the Christianists and their goal of imposing their poisonous version of Christianity on all - much like the Islamic extremists currently cracking down on the reform minded opposition.
Posted by Michael-in-Norfolk at Sunday, July 05, 2009