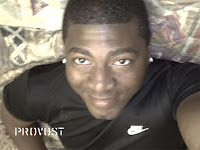 In what seems to be an all too familiar scenario, the family of slain Navy Seaman August Provost, III, are complaining that Provost had been complaining for over a year about harassment and the Navy higher ups did nothing. Apparently, strict discipline and punishment do not apply when the target of harassment is gay. The sad truth is that many military commanders turn a blind eye to anti-gay harassment and take a "boys will be boys" attitude and/or yuck it up when the harassment targets a "faggot." What is especially disturbing is the brutality to which Provost was subjected - reflecting an all too prevalent attitude that somehow gays are not fully human. Instead of barring gays from the military, it is the bigots who should be barred since they likely commit atrocities in places like Iraq against others who they likewise see as less than human. Here are some highlights from the Houston Chronicle:
*
Relatives of a slain sailor are calling the 29-year-old’s death a hate crime. Rose Roy of Beaumont said her nephew, Navy Seaman August Provost III, had complained a year before about being harassed for being gay. Roy said she advised Provost to report and document the incidents, but she said the military did little to help. “He went to the Navy to serve and protect,” she said in an interview with Beaumont’s KFDM News, “he didn’t get protected at all.” Roy told The Associated Press that the military’s “Don’t Ask, Don’t Tell” policy discouraged her nephew from asking for help. “That phrase is just stupid because it tells them they have no one to speak to,” she said.
*
The 29-year-old Houston native was found dead Tuesday at Marine Corps Base Camp Pendleton, north of San Diego. Roy said the family was told that Provost was shot three times, had his hands and feet bound, his mouth gagged, and body burned. The family plans to hold funeral services July 10 in Houston.
*
Democratic Rep. Bob Filner of San Diego said Thursday he wants a Defense Department investigation into the death, after leaders of the city’s gay community asked him to intervene. Investigators have called the sailor’s death a random act unrelated to the his sexuality and have taken a “person of interest” into custody. No charges have been filed.
Roy said Provost joined the Navy in March 2008 to pay off college debt.
*
Living in this area with a huge Navy presence, I have zero confidence that the Navy would ever admit that Provost's death was an anti-gay hate crime no matter how overwhelming the evidence. What is equally frightening is that the mindset of someone who would treat another human so brutally is daily reinforced by the Christianists who allege gays seek to destroy the family or bring God's wrath down on America.
Posted by Michael-in-Norfolk at Sunday, July 05, 2009