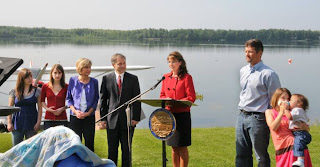 Between Sarah "Bible Spice" Palin and the can't keep in in their pants family values GOP elected officials, today's Republican Party has become the gift that just keeps on giving in terms of daily insanity and hypocrisy, thus providing endless opportunity for commentary. As for, Bible Spice, it seems one her more insane moves -and they are nearly countless in number - was to bad mouth and piss off Levi Johnson, the father or her out of wedlock grandchild. Levi seems poised to do a tell all book that one can only contemplate would be bad news for Palin. Moreover, Johnson seems to surprisingly have Palin's number as noted here from The Mudflats:
*
To the surprise of many, Levi Johnston has more than once proved to be the most level-headed person in the room when it comes to many of the trials and tribulations of Sarah Palin and her daughter Bristol. So it’s interesting to hear what he has to say. Remember that Levi says he was living with the Palin family from early December through mid-January. They say he wasn’t. He says he had all his stuff there and slept there. They say he wasn’t living there. He says, yeah…whatever.
*
Levi decided to pipe up today and give us the reason he thinks she qui….”stepped down.” According to his attorney Rex Butler, people want to know the real reason, so Levi decided to give his take. So, what does Levi think is the real reason for the resignation? Money. He claims he heard the governor several times say how nice it would be to take advantage of the lucrative deals that were being offered, including a reality show and a book. “I think the big deal was the book. That was millions of dollars,” said Johnston,
*
Alaska Dispatch has some other interesting and entertaining analysis of Bible Spice whom the GOP base continue to embrace no matter how crazy she acts - which in and of itself speaks volumes about what has happened to a party that once seemed to value and embrace logic and intelligence. Fortunately, I do not see any way that Palin can ever make herself into a viable national candidate again - she is simply too brainless and hurts herself every time she opens her mouth. Too many Americans have figured out that she is a whack job and is over her head even as mayor of Wasilla. Here are a few highlights from Alaska Dispatch:
*
It has been almost a week since Sarah Palin rocked the news cycle by announcing her intention to quit her job as Governor of Alaska. Since then, pundits from Karl Rove on the right to Mark Shields on the left have offered diverse answers to the two questions that every Alaskan has been asking every other Alaskan: Is Sarah Palin really the Whack Job that Tina Fey made her out to be? If she's not, then What Could the Woman Have been Thinking?
*
After watching the Friday news conference, Washington Post columnist Michael Gerson said that he thought Sarah "seemed more like a spoiled celebrity than a serious public official." What Gerson got wrong is that Sarah is a spoiled celebrity. But it's not entirely her fault that she's spoiled. Because the media attention that has swirled around Alaska's governor-girl for the past ten months has altered the brain chemistry of a narcissistic personality that somewhere way back along the line was damaged decades previous.
*
An Australian friend of mine has theorized that Sarah's odd behavior suggests that she has been afflicted since childhood with Reactive Attachment Disorder, a rare psychological condition that is described in volume four of the American Psychiatric Association's Diagnostic and Statistical Manual of Disorders. Many of the symptoms do seem to fit: superficially engaging and charming, lacks cause and effect thinking, inappropriately demanding, engages in lying, lacks a conscience, has poor impulse control, has abnormal speech patterns, etc.
*
The Chimperator was a mindless idiot while in office, but Bible Spice manages to make him look fairly stable in comparison.
Posted by Michael-in-Norfolk at Saturday, July 11, 2009