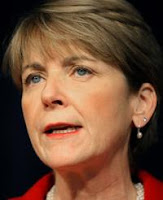 As the Boston Globe and a number of blogs are reporting, the state of Massachusetts, acting through state Attorney General Martha Coakley (pictured at left) has filed suit in federal court challenging the constitutionality of the Federal Defense of Marriage Act ("DOMA") for its discriminatory impact against against legally married citizens of Massachusetts. As Massachusetts rightly argues, the U. S. Constitution grants equality to all citizens and DOMA amounts to unconstitutional discrimination. I'd go even further and also state that DOMA is an unconstitutional act of discrimination based on religion as well. In fact, in the final analysis when all the other disingenuous arguments are stripped away, ALL of the anti-gay statutes and state constitutional amendments should be struck down as unconstitutional religious based discrimination. Here are highlights from the Boston Globe article:
*
Massachusetts, the first state in the nation to legalize gay marriage, has become the first to challenge the constitutionality of a federal law that defines marriage as the union of a man and a woman, saying Congress intruded into a matter that should be left to individual states.
*
"Our familes, our communities, and even our economy have seen the many important benefits that have come from recognizing equal marriage rights and, frankly, no downside," Attorney General Martha Coakley said this afternoon at a news conference announcing the lawsuit. "However, we have also seen how many of our married residents and their families are being hurt by a discriminatory, unprecedented, and, we believe, unconstitutional law."
*
The suit filed in US District Court in Boston claims that the Congress, in enacting the DOMA, "overstepped its authority, undermined states' efforts to recognize marriages between same-sex couples, and codified an animus towards gay and lesbian people."
*
The lawsuit argues that the DOMA, which was enacted in 1996, precludes same-sex spouses in Massachusetts from a wide range of protections, including federal income tax credits, employment and retirement benefits, health insurance coverage, and Social Security payments. The defendants named in the lawsuit include the US Department of Health and Human Services, the US Department of Veterans Affairs, and the United States itself.
*
The lawsuit questions the constitutionality of Section 3 of the law, which defines the word "marriage" for the purpose of federal law as "a legal union between one man and one woman as husband and wife." . . . The suit alleges that the law violates the 10th Amendment to the Constitution, which reserves to the states all powers except those granted to the federal government. It also alleges that the law violates Article 1, Section 8 of the Constitution, which limits the power of Congress to attach conditions to the receipt of federal funds.
*
Coakley noted that the suit is focused on the impact of Section 3 of the DOMA in Massachusetts. Coakley also noted she backs the repeal of the DOMA. "I think everybody would agree that times have changed since 1996," she said.
*
Hopefully, the courts will see the merits of the lawsuit and strike down DOMA. I can already hear the disingenuous whining, shrieking and dishonest blathering of the Christianists should Massachusetts be successful in its lawsuit.
Posted by Michael-in-Norfolk at Wednesday, July 08, 2009

Email ThisBlogThis!Share to TwitterShare to FacebookShare to Pinterest
Labels: DOMA, equality under the civil law, federal rights and benefits, Massachusetts, religious based discrimination

Unlike Mr. Smelt, the state of MA has standing for a lawsuit (the issue that if the DOJ felt the need to file a brief in the Smelt case should have been the only one it addressed IMHO).

There is some historical irony in this case coming from the most theocratic of the original 13 colonies!