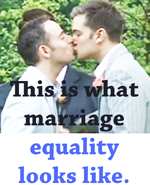 Our Christianist enemies are constantly depicting gays and same sex marriage as a "threat to the family" even as so-called family values Republicans desecrate their marital vows through affairs and/or serial marriages. Personally, it seems that the Christianists and professional Christians could better use their time working to clean up the heterosexual marriage debacle before they worry about "protecting marriage" from the gays. I'd even go so far as to venture that many gays place a far higher value on marriage than straights since we are deprived the right in most states. One example of this is the recent marriage of fellow blogger Jeremy Hooper of Good As You who I had the privilege of getting to know at the LGBT Blogger Summit last December.
*
Jeremy and his partner, Andrew, were married in Connecticut and Jeremy has a wonderful series of photos and video clips on his blog here from the wedding and their honeymoon. I truly wish opponents of same sex marriage would take the time to open their minds and look at the love and emotion so visible in the scenes from Jeremy and Andrew's wedding. No one is harmed. No families are damaged. As Jeremy notes, their wedding represents:
*
A celebration of two boys' right to love, peace, and equality. . . No religious freedoms were harmed in the making of these videos. . . . And we take it all home to NYC, where our marriage earns full state-level recognition.
*
Congratulations Jeremy and Andrew!!
*
I actually know a number of other married gay couples who have traveled to other states or countries to get married. In every case, they seem to place a far higher value on their relationships and marriages than many, many straights who sometimes enter into marriage almost without thinking or without taking the matter seriously enough. The irony is that in states like Virginia marriage is denied to those who truly want it yet given freely to those who take it for granted.
Posted by Michael-in-Norfolk at Thursday, July 09, 2009

Email ThisBlogThis!Share to TwitterShare to FacebookShare to Pinterest
Labels: full equality under the civil laws, gay marriage, Good As You, same sex marriage