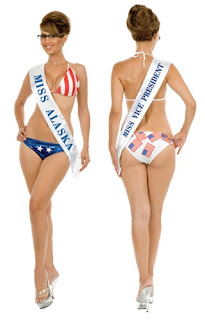 Anyone who read this blog back during the presidential campaign last year knows that I am no fan of Sarah Palin - in my opinion she is a deranged nutcase - and still cannot fathom why McCain selected her for the VP slot other than to appease the Christianist base. Unfortunately, Palin is the poster girl - or pin up - for the far right base of the Republican Party that seems to live in some warped parallel universe from the rest of us where being in touch with objective reality is actively frowned upon. Personally, I hope it comes out that her resignation was due to some impending scandal - rumors are flying as to who really paid for the Palin home that Caribou Barbie's hubby says he and a few buddies built. The best thing that can happen to the GOP is that Palin goes down in flames and is exposed for the lunatic that her behavior suggests. Just last night, in fact, I said to the boyfriend as we sat behind a car with a McCain/Palin bumper sticker that I'd be embarrassed to have Palin's name in anyway associated with me. Maureen Dowd has a great column in the New York Times that looks at Palin's bizarre fantasy world:
*
Sarah Palin showed on Friday that in one respect at least, she is qualified to be president. Caribou Barbie is one nutty puppy.
*
Usually we don’t find that exquisite battiness in our leaders until they’ve been battered by sordid scandals like Watergate (Nixon), gnawing problems like Vietnam (L.B.J.), or scary threats like biological terrorism (Cheney).
*
And so it was, Todd Purdum learned, as he traveled Alaska reporting on Palin for Vanity Fair, that the governor’s erratic and egoistic behavior has been a source of concern for people there.
“Several told me, independently of one another,” Purdum writes, “that they had consulted the definition of ‘narcissistic personality disorder’ in the Diagnostic and Statistical Manual of Mental Disorders — ‘a pervasive pattern of grandiosity (in fantasy or behavior), need for admiration, and lack of empathy’ — and thought it fit her perfectly.”
*
What looked like a secret wedding turned out to be a public unraveling as the G.O.P. implosion continued: Sarah wanted everyone to know that she’s not having fun and people are being mean to her and she doesn’t feel like finishing her first term as governor. She can hunt wolves from the air and field-dress a moose, but she fears being a lame duck? Some brickbats over her ethics and diva turns as John McCain’s running mate, and that dewy skin turns awfully thin.
*
Maybe there’s another red Naughty Monkey high heel to drop — there’s often a hidden twist in Sarah’s country-music melodramas. Or is this a reckless high-speed escape from small-pond Alaska, where her popularity is dropping, to the big time Below?
*
The maverick must run free when greener pastures beckon. The musher must jump out of the dogsled when warmer climes call. As Palin’s spokeswoman, Meg Stapleton, says, “The world is literally her oyster.” But just remember, beloved Alaska, it’s all about you.
*
The only greener pasture that Palin needs to run to is in my view a psych ward.
Posted by Michael-in-Norfolk at Sunday, July 05, 2009