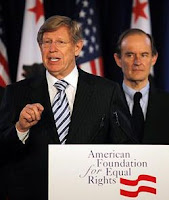 In an interesting turn, the American Foundation for Equal Rights - which is backing the Olson-Boies legal team in Perry v. Schwarzenegger which is challenging Proposition 8 and seeking to put the question of marriage equality before the United States Supreme Court - has told a number of LGBT rights organizations who typically see themselves as the arbiters of the struggle for LGBT equality to basically get lost. As you will recall, when the lawsuit was filed by Olson-Boies, Lambda Legal and these others organizations issued a warning that "ill-timed lawsuits could set the fight for marriage back.
*
My experience has been that typically these organizations do little for the cause of everyday LGBT citizens even as they constantly solicit donations to "fight for equality." Lambda Legal has provided some limited assistance on occasion in respect to transgender issues and the ACLU's LGBT unit recently assisted in some legal brief writing. I'm sad to say that HRC has been largely worthless to date whenever contacted for support or assistance. The result is that LGBT citizens seeking legal help are largely left to their own devices and may find themselves hard put to even find an attorney who will take their case. Difficulty finding gay friendly legal counsel can be a problem here in the Hampton Roads area and is an extreme problem in more reactionary parts of the state.
*
In any event, in the Perry case the American Foundation for Equal Rights sent a letter out to these often self-aggrandizing organizations and told them DO NOT try to intervene in the case. A copy of the letter can be found on Towleroad here. Here are some of the highlights:
*
"On behalf of the plaintiffs and our board, donors and supporters, I am writing to ask that you not intervene in Perry v. Schwarzenegger.
"Given our willingness to collaborate with you, and your efforts to undercut this case, we were surprised and disappointed when we became aware of your desire to intervene.
*
"You have unrelentingly and unequivocally acted to undermine this case even before it was filed. In light of that, it is inconceivable that you would zealously and effectively litigate this case if you were successful in intervening. Therefore, we will vigorously oppose any motion to intervene."
*
Ouch!! Sometimes the truth hurts, but I am pleased that these organizations have been called out. They do not have a monopoly on deciding strategy and dictating how the rest of us are to work to gain full equality for LGBT Americans under the civil laws. As Andy Towle notes, they may now realize that they missed the boat on this lawsuit or are out to sabotage the work of a rival organization:
*
It would appear Lambda Legal, National Center for Lesbian Rights and the ACLU LGBT Project are either realizing the case might actually be successful and therefore want to ride its coattails for credit and relevancy, or—depending on your capacity for cynicism—are intentionally dragging down a suit from a rival group working for the same cause.
Posted by Michael-in-Norfolk at Friday, July 10, 2009