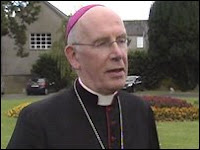 In what on its face may be an unprecedented move, Irish Catholic Cardinal Sean Brady (at left) is pledging to perhaps finally do something to remove members of the Irish Church hierarchy who have failed to protect children from predator priests. This might even involve removing Bishop John Magee of the Diocese of Cloyne who has been shown to have abysmally failed to act to protect minors from sexual abuse. While it would be nice to believe that Brady's motivations are the right ones, it's likely that the real reason for the pledge is motivated by a desire to stop the Catholic Church's free fall in public opinion in Ireland. Time will tell if the long overdue steps to remove members of the hierarchy who enabled and/or covered up abuse will get removed from their positions. Here are some highlights from the Irish Independent:
*
THE days of Bishop John Magee as head of the Cloyne diocese appeared to be numbered last night after a dramatic pledge by the leader of the Irish Catholic Church to eradicate clerical child sex abuse. In a strongly-worded statement, Cardinal Sean Brady pledged a root-and-branch reform of all 26 dioceses, as he desperately sought to restore public confidence in the Church's ability to protect children.
*
The Primate of All Ireland and Archbishop of Armagh admitted recent findings from a damning report on clerical sexual abuse in the diocese of Cloyne had "brought into question" the efforts of thousands of volunteers and trained personnel to protect children. Cardinal Brady's dramatic intervention, understood by the Irish Independent to have been issued after consultation with Pope Benedict, brings him out on the side of the Archbishop of Dublin, Diarmuid Martin, who had threatened to withdraw co-operation from fellow bishops, including Bishop Magee.
*
ast night, church sources predicted that if Bishop Magee, a former secretary to three popes, did not stand down before the Cabinet meets next Wednesday, Rome might be forced to remove him.
*
Children's Minister Barry Andrews last night welcomed Cardinal Brady's statement, in particular "his specific comments in relation to Cloyne". However, abuse charity One-in-Four last night said Archbishop Brady's intervention was "too little, too late". Executive Director Maeve Lewis called on the Bishop of Cloyne to stand down and criticised Cardinal Brady for failing to comment directly on his handling of the scandal.
*
The crisis takes on added significance with the imminent publication of the report of a Government Commission of Inquiry into the country's biggest diocese, Dublin. It is expected that the report will contain some shocking revelations, that could rock Church and State to their very foundations. The Vatican has, to date, not publicly commented on the controversy.
*
Would that there was a similar government commission in the USA looking into the misdeeds of the Catholic Church and its hierarchy. Unless and until the Church is forced to do a much needed house cleaning, Catholics should vote with their feet and check books and not support the Church. I find it sickening that Catholics continue to fawn over such morally bankrupt Church leaders, Benedict XVI included.
Posted by Michael-in-Norfolk at Monday, January 05, 2009