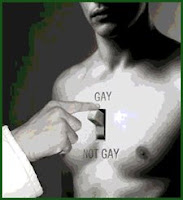 Recently, Regina Griggs of PFOX (Parents and Friends of Ex-Gays and Gays) - an organization set up by an funded by major anti-gay Christian Right organizations to help breath life into the "ex-gay" myth which is so important to the Christianists' efforts to deny legal equality to LGBT citizens - has once again and all too typically been lying about real research findings. As more and more research supports the unchanging nature of sexual orientation or in this instance the negative consequences of parental rejection of their LGBT children as found in the recent study, self-styled professional Christians like Griggs attempt to discredit findings that run counter to their religious fanaticism by lying about what the research findings state or selectively quoting from them to yield an utterly different conclusion. Personally, I don't know why the Christianist do not formally adopt a New Nine Commandment standard since they always ignore the Commandment against bearing false witness. Here are some highlights from Holy Bullies and Headless Monsters on Griggs' latest dishonesty:
*
In what seems to be becoming a habit, another professor has cried foul over what he calls the distortion of his work by the religious right.Theo Sandfort, Associate Professor of Clinical Sociomedical Sciences (HIV Center for Clinical and Behavioral Studies - New York State Psychiatric Institute and Columbia University) said his work is being incorrectly cited.
*
Recently, Regina Griggs of PFOX (Parents and Friends of Ex-Gays and Gays) voiced her displeasure with a recent study conducted in California that said young gays and lesbians were more likely to suffer depression or commit suicide if their parents or guardians reacted negatively to their sexual orientation.
*
Griggs also added: Studies in the Netherlands -- where there is an "extremely open society," notes Griggs -- found that although the homosexual lifestyle is affirmed through the culture, the suicide rates have remained steady or increased.
*
The "studies" Griggs alluded to is actually one study and it has been cited by the religious right numerous times to claim that homophobia has very little to do with the depression and suicide rate of lgbts. The study, Same-Sex Sexual Behavior and Psychiatric Disorders, appeared in the Archives of General Psychiatry in 2001 and it looked at psychiatric disorders in gay adults from the Netherlands. . . . Griggs incorrectly cites this study because it had absolutely nothing to do with the subject at hand (i.e. negative behaviors in lgbt youth in the United States).
*
Via email, Professor Sandfort said: There is a difference between the U.S. and the Netherlands in terms of acceptance of homosexuality. That does not mean that there is no homophobia (and homophobic damage) in the Netherlands. It is not clear how difference in climate affects the prevalence of mental disorders. We don't know the final answers, but in the U.S. as well as the Netherlands, homophobia is related to mental health problems.
*
He also said that Griggs and others who use the study to claim that homophobia does not have an effect on negative lgbt behavior are clearly distorting his work:" They use data to promote their moral convictions without truly understanding what the issues are. They are not interested in understanding how people's lives are affected by their social environment."
*
Sandfort's complaint is not the first time a professor has cried foul about how PFOX distorts his work. Last year, Gary Remafedi, a professor of pediatrics at the University of Minnesota, complained that PFOX distorted his work on suicide attempts in gay youth.
*
Sadly, the bottom line is that fanatics like Griggs care NOTHING about the damage they do to LGBT youth much less LGBT adults. I can assure you that it was homophobia and an all day divorce hearing where I was crucified for being gay that pushed me to my own nearly successful suicide attempt. To Griggs and her fellow Christianists, I - like all other LGBT individuals - are disposable and they care only about their agenda to persecute gays. They are NOT Christians but instead are monsters.
Posted by Michael-in-Norfolk at Thursday, January 08, 2009