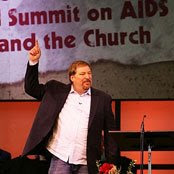 I have consistently believed that, given Rick Warren's huge ego and his propensity to run his mouth bragging, eventually much closer scrutiny would be given to his boasts. It's beginning to happen and not surprisingly, once you look behind Warren's claims, the picture is less than pretty. A case in point is Warren's claims that he's done so much to fight AIDS in Africa. The true story is that Warren's "help" has been to undermine legitimate scientifically based efforts with typical whacked out Christianist abstinence only sex education only. Worse yet, he is in league with far right religious extremists advocating for the criminalization of homosexuality. The bottom line? Warren is a liar just like most of the Christianist leadership. It looks to me like Obama might have done a better jog "vetting" Warren. Obama needs to get some balls and uninvited Warren NOW. Here are highlights from Max Blumenthal's latest column in the Daily Beast that provide the real story on Warren :
*
Once hailed by Time magazine as “America’s Pastor,” California mega-church leader and bestselling author of The Purpose Driven Life Rick Warren now finds himself on the defensive. President-elect Barack Obama’s selection of Warren to deliver the inaugural prayer has generated intense scrutiny of the pastor’s beliefs on social issues, . . . Warren’s defense against charges of intolerance ultimately depends upon his ace card: his heavily publicized crusade against AIDS in Africa.
*
David Axelrod cited Warren’s work in Africa as one of “the things on which [Obama and Warren] agree” on the December 28 episode of Meet the Press. Warren may be opposed to gay rights and abortion, the thinking goes, but he tells evangelicals it is their God-given duty to battle one of the greatest pandemics in history. What could be wrong with that?
*
In a word, PLENTY. And Obama and his minions like Axelrod need to admit that the selection of Warren was a massive mistake and cut their loses. Here's the real story:
*
[A]n investigation into Warren’s involvement in Africa reveals a web of alliances with right-wing clergymen who have sidelined science-based approaches to combating AIDS in favor of abstinence-only education. More disturbingly, Warren’s allies have rolled back key elements of one of the continent’s most successful initiative, the so-called ABC program in Uganda. Stephen Lewis, the United Nations’ special envoy for HIV/AIDS in Africa, told the New York Times their activism is “resulting in great damage and undoubtedly will cause significant numbers of infections which should never have occurred.”
*
Warren’s man in Uganda is a charismatic pastor named Martin Ssempa. The head of the Makerere Community Church, a rapidly growing congregation, Ssempe enjoys close ties to his country’s First Lady, Janet Museveni, and is a favorite of the Bush White House. In the capitol of Kampala, Ssempa is known for his boisterous crusading. Ssempa’s stunts have included burning condoms in the name of Jesus and arranging the publication of names of homosexuals in cooperative local newspapers while lobbying for criminal penalties to imprison them.
*
Dr. Helen Epstein, a public health consultant who authored the book, The Invisible Cure: Why We’re Losing The Fight Against AIDS In Africa, met Ssempa in 2005. Epstein told me the preacher seemed gripped by paranoia, warning her of a secret witches coven that met under Lake Victoria. “Ssempa also spoke to me for a very long time about his fear of homosexual men and women,” Epstein said. “He seemed very personally terrified by their presence.”
*
Janet Museveni, who had become born-again . . . flew to Washington at the height of a heated congressional debate over PEPFAR. She carried in her hand a prepared message to distribute to Republicans. Abstinence was the golden bullet in her country’s fight against AIDS, she assured conservative lawmakers, denying the empirically proven success of her husband’s condom distribution program. Like magic, the Republican-dominated Congress authorized over $200 million for Uganda, but only for the exclusive promotion of abstinence education.
*
HIV infections were on the rise again. The disease rate had spiked to 6.5 percent among rural men, and 8.8 percent among women—a rise of nearly two points in the case of women. “The ‘C’ part [of ABC] is now mainly silent,” said Ugandan AIDS activist Beatrice Ware. As a result, she said, “the success story is unraveling.”
*
With safe sex advocates on the run, Warren and Ssempa trained their sights on another social evil. In August 2007, Ssempa led hundreds of his followers through the streets of Kampala to demand that the government mete out harsh punishments against gays. “Arrest all homos,” read placards. And: “A man cannot marry a man.” Ssempa continued his crusade online, publishing the names of Ugandan gay rights activists on a website he created, along with photos and home addresses. “Homosexual promoters,” he called them, suggesting they intended to seduce Uganda’s children into their lifestyle.
*
Warren, in his effort to dispel criticism, has denied harboring homophobic sentiments. “I could give you a hundred gay friends,” he told MSNBC’s Ann Curry on December 18. “I have always treated them with respect. When they come and want to talk to me, I talk to them.”
*
But when Uganda’s Anglican bishops threatened to bolt from the Church of England because of its tolerant stance towards homosexuals, Warren parachuted into Kampala to confer international legitimacy on their protest. “The Church of England is wrong and I support the Church of Uganda on the boycott,” Warren proclaimed in March 2008. Declaring homosexuality an unnatural way of life, Warren flatly stated, “We shall not tolerate this aspect [homosexuality in the church] at all.”
Posted by Michael-in-Norfolk at Wednesday, January 07, 2009