Dan Savage is reporting that eleven gay bars in Seattle have received letters - a copy is set out below - threatening ricin attacks on patrons. Unfortunately, when Christianists are permitted to run unfettered claiming that gays are "destroying the family," threatening civilization, and as per the Catholic Church are inherently disordered, the result is that some of their followers will feel that they have a license - indeed are justified - in attacking and killing LGBT citizens. Yet, we have Obama selecting one of these hate merchants to give the invocation at the upcoming inauguration. These people need to be shunned and exposed for the extremists that they are not embraced. Read the letter and see if you find anything Christian about it. Here's more from Dan Savage:
*
Eleven gay bars in Seattle received letters today addressed to the "Owner/Manager" from someone claiming to be in the possession of ricin, a deadly poison. "Your establishment has been targeted," the letter begins. "I have in my possession approximately 67 grams of ricin with which I will indiscriminately target at least five of your clients." "I felt sick when I read it," said Carla, the owner/manager of Re-bar. "It's so vile. It's just hatred. It made me worry for all the other bars, and for my bartenders, and our clientele."
*
"I just had the police come pick [the letter] up," said Keith Christensen, the manager of the Eagle, when reached by phone. Christensen had already heard about the letter from other bar owners and managers, and so he didn't open it. "It's probably nothing," Christensen added, "but the economy is really screwing all the bars right now, and the last thing we need is something ramping up the not-go-out mode people seem to be in right now. It's really freaky that someone would do something like this at a time like this." Christensen says he's posted signs at the Eagle advising patrons not to leave their drinks unattended.
*
A letter also arrived in The Stranger's offices, addressed to the attention of "Obituaries." The letter's author said the paper should "be prepared to announce the deaths of approximately 55 individuals all of whom were patrons of the following establishments on a Saturday in January." The listed bars are: the Elite, Neighbours, Wild Rose, the Cuff, Purr, the Eagle, R Place, Re-bar, CC's, Madison Pub, and the Crescent. "I could take this moment to launch into a diatribe about my indignation towards the gay community," the letter concludes, "however, I think the deaths will speak for themselves." 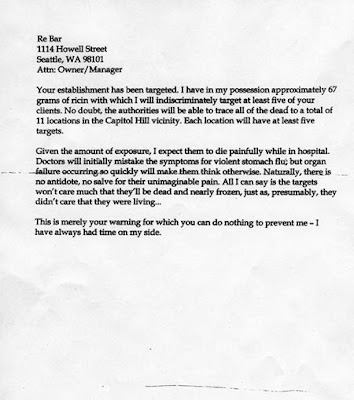 Posted by Michael-in-Norfolk at Wednesday, January 07, 2009