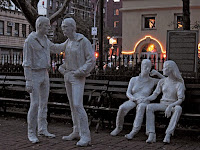 The past long weekend in New York City was wonderful fun and it's a bit of a let down to be back in Tidewater Virginia with all its conservatism and backwardness on social issues, gay rights in particular. Saturday night we had dinner at a great restaurant in the West Village, Philip Marie, where we had a fabulous young aspiring actress as our waitress. Later, we went to Splash and then back by the Monster. Sunday was leisurely and then consisted of walking around China Town and Little Italy before heading to the airport.
*
Besides its 100+ gay clubs, what is striking about New York in contrast to this area is the fact that gays are so much more open about who they are and that the fear factor that plagues so many gays here doesn't seem to exist. Sadly, I know a number of gay professionals and business owners in this area who live in terror of discovery, believing that all of their clients/customers would leave them if their sexual orientation became known. Some I think have allowed their fears to run amuck and make the danger far larger in their minds than what would be the reality. Nonetheless, with no state or federal employment non-discrimination protections and Don't Ask, Don't Tell still driving gays in the military underground, Virginia remains far behind the times.
*
A repeal of DADT would be a good first start in changing the atmosphere here and might indirectly help get the Virginia General Assembly to come into the 21st century. Allowing blacks to serve in the military helped in many ways to dispel prejudice and if gays can serve openly as equals, it will mitigate the Christianists efforts to depict us as "other" and/or less than fully human. I will be watching to see if Obama moves to make good on his promises to the LGBT community - right now, he appears to have sold us out. Meanwhile, I guess we will just continue to muddle along.
Posted by Michael-in-Norfolk at Monday, January 05, 2009

I was struck by your comments about the difference you saw and felt in NYC and the atmosphere in Tidewater and it made me think about how fortunate those of us who live in places where the fear of being "outed", losing one's job, being ostracized is not so prevalent. On the other hand, we had three gay men murdered in DC last year and more attacked. So the struggle continues.

Best for you and your BF for the New Year.