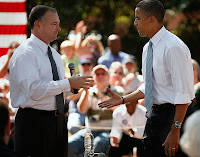 UPDATED: Ironically - or perhaps not - HRC is singing Tim Kaine's praises even though when contacted by my client for help, HRC did ABSOLUTELY NOTHING, not wanting to "upset" Governor Kaine who I guess might not attend HRC parties if "upset." Kaine is cited by HRC for helping turn Virginia Blue even though in reality it is (1) Virginia's changing demographics, (2) the horrific track record of the Chimperator's regime, and (3) Obama's ground game that won the day. Once again, HRC is out of touch with reality. Yet another reason to NOT renew my HRC membership - at least not until it gets new leadership that doesn't focus on being a lap dog for elected officials.
*
The Virginian Pilot and many other news outlets are reporting that Virginia Governor, Timothy Kaine will be the next Chairman of the Democratic National Committee. I am less than enthused by Kaine's selection. Why one might ask? Because when examined closely, Kaine is weak on gay rights and may represent yet another case like Barack Obama throwing gays under the bus after cynically courting our votes and soliciting our money as evidenced by the selection of Christianist Rick Warren to give the inaugural invocation. At least with Warren, his appearance will be short lived and he will not be influencing Democratic Party policy. My prediction is that Kaine will do absolutely nothing to further LGBT equality as DNC chair. Zero. Nada.
*
On the surface, Kaine can claim to be "gay friendly" - at least when compared to say Virginia Attorney General Bob McDonnell who tows the line with Daddy Dobson's Virginia affiliate, The Family Foundation, and has to date not found a piece of anti-gay legislation he cannot willingly embrace. Kaine did sign Executive Order 1 (2006) purporting to protect gay state employees upon taking office, thereby extending the policy of incoming U.S. Senator Mark Warner who Kaine succeeded as governor. But in terms of making sure that the Executive Order is enforced in a competent and timely manner, Kaine has been 100% missing in action. Moreover, the alleged investigation by the governmental department supposedly charged with enforcing the Executive Order of a complaint filed by a client against the Virginia Museum of Natural History has by the agency's own prior statements already taken 440+ days longer than it should have. And still no determination is in sight. I've even speculated that Kaine wants to drag the matter out long enough so that he can be out of office when a decision is rendered and thus avoid a show down with Bob "Taliban Bob" McDonnell who has issued a non-binding opinion that the Order exceeded Kaine's authority as governor.
*
Save and except for the theoretical protections afforded LGBT state employees under Executive Order 1 (2006), LGBT Virginians have ZERO employment non-discrimination protections. That's right. Zero protection from being summarily fired due to their sexual orientation. Sadly, Kaine's execution of Executive Order 1(2006) appears in retrospect to have been window dressing he never planned to have enforced based on a recent mealy mouthed letter from Kaine's office. The Executive Order was apparently a mere crumb thrown for show to the LGBT Virginians who helped get him elected. It is beyond troubling to me that someone with such a weak commitment to LGBT rights and equality is now DNC chairman. Maybe we should stop giving our hard earned money to such cynical and disingenuous politicians.
*
NOTE: I have documentation on all of the above statements.
Posted by Michael-in-Norfolk at Monday, January 05, 2009

Nothing there about gender identity.