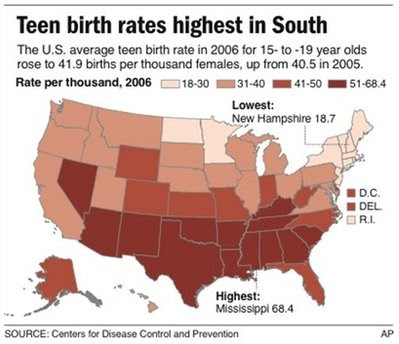 It looks to me that the heavily evangelical Deep South states need to spend less time gay bashing, obsessing over gay marriage, trying to inflict their theocratic agenda on the rest of us and worrying about what law abiding LGBT citizens do in the privacy of their own bedrooms and pay more attention to the fact that delusional abstinence only sex educations do NOT work. Here are a few highlights from Yahoo News:
*
Mississippi now has the nation's highest teen birth rate, displacing Texas and New Mexico for that lamentable title, a new federal report says. Mississippi's rate was more than 60 percent higher than the national average in 2006, according to new state statistics released Wednesday by the U.S. Centers for Disease Control and Prevention. The teen birth rate for that year in Texas and New Mexico was more than 50 percent higher.
*
The lowest teen birth rates continue to be in New England, where three states have rates at roughly half the national average, which is 42 births per 1,000 teen women.
*
Some experts have blamed the national increase on increased federal funding for abstinence-only health education that does not teach teens how to use condoms and other contraception. They said that would explain why teen birth rate increases have been detected across much of the country and not just in a few spots.
Posted by Michael-in-Norfolk at Friday, January 09, 2009

I am a little surprised CA is off this list considering its size and because they always seems ahead of most curves.