On Saturday night I detailed how the boyfriend and I found ourselves in the midst of an anti-Israel demonstration while in New York City. The photo at bottom shows what we stepped out into when we exited the show we had gone to see earlier in the day. I continue to believe that regardless of its objectives, Israel has likely set itself up for a PR disaster in terms of the ongoing assault in the Gaza Strip. The destruction and deaths being wrought on Palestians (as seen in the photo above of the legs of the body of one of three Palestinian siblings killed by an Israeli tank shell from Andrew Sullivan) seems to far out weigh the losses suffered by Israel and I fear will further undermine support for Israel and been seen as validating Palestinian grievances. Here are some highlights from the Daily News about the demonstration:
*
Chanting "Free Palestine," thousands of Palestinian supporters demonstrated in Times Square Saturday to protest Israel's punishing military offensive in Gaza. The wave of protesters stretched across three blocks, dwarfing the dozens of boisterous supporters of Israel assembled across Seventh Ave.
*
"What's happening in Gaza is something that shouldn't be tolerated anywhere in the world," said Bassal Omar, 29, an American-born Palestinian from the Bronx. "It's a humanitarian crisis, and it's just going to get worse."
*
Apparently some supporters of Israel are catching on and becoming appalled by the deaths of Palestinian children as evidenced by these comments from J Street:
*
Israel has a special place in each of our hearts. But we recognize that neither Israelis nor Palestinians have a monopoly on right or wrong. While there is nothing "right" in raining rockets on Israeli families or dispatching suicide bombers, there is nothing "right" in punishing a million and a half already-suffering Gazans for the actions of the extremists among them.
*
And there is nothing to be gained from debating which injustice is greater or came first. What's needed now is immediate action to stop the violence before it spirals out of control. The United States, the Quartet, and the world community must not wait - as they did in the Israel-Lebanon crisis of 2006 - for weeks to pass and hundreds or thousands more to die before intervening. 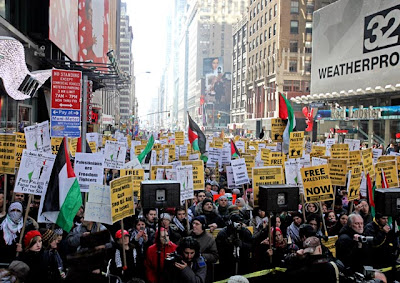