Trump is Betraying is Republican Enablers In The 11th Hour 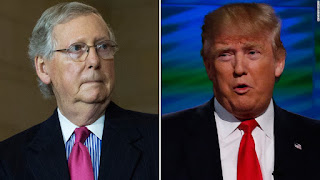 If one follows Donald Trump's business career one readily find a pattern of behavior  that is a cross between a school yard bully and a Mafia crime boss, with threats and extortions the norm and a sea of unpaid creditors. Somehow many Congressional Republicans insanely believed they would be able to control Trump - just as they insanely thought they would be able to control Christofascists allowed into the party - only to discover that Trump would knife them in the back in a heart beat and that only a fool or demented idiot would ever trust the man.  Now, Trump is poised to derail the Covid relief bill approved by Congress and perhaps tank the GOP senatorial campaigns in Georgia as he tries to blackmail Congressional Republicans to basically find a way to engage in a coup to overturn the 2020 election results.  But for the harm done to Americans in need of another round of pandemic relief and the threat Trump comprises to American democracy as long as he continues to draw breath, the situation would be comical and would cheer seeing the likes of Mitch "Moscow Mitch" McConnell getting screwed over by Der Trumpenfuhrer.  A piece in Salon looks at the self-created situation Republicans find themselves in:

Trump really does believe that Republicans know some super secret method for nullifying the election he just lost, and that they're just not revealing it to him for some reason. In reality, Republicans probably would help him steal the election if they could, but they can't. But Trump refuses to accept this so he is constantly wheedling GOP officials to do more and whining publicly that they're holding out on him. He's even considering canceling a Mar-A-Lago trip and staying in D.C. for Christmas, probably because he's talked himself into believing he can strike a "deal" to nullify the election.

Trump is particularly incensed at McConnell right now for not doing more to make Trump's failed coup successful. On Monday, Trump's office sent out emails to congressional Republicans in which Trump took credit (falsely) for McConnell's successful re-election, and implied that McConnell should show his gratitude by doing more to steal the presidential election for Trump. Trump believes that Congress will have an opportunity to overturn the election on January 6, by refusing to certify the Electoral College vote. We know he believes this, even though it's false because he's been scheming with House Republicans on how to do it. We also know — because Trump keeps tweeting about it — that Trump believes Senate Republicans are, for whatever reason, not doing enough to help him and need so more threats to get motivated to back his coup.

McConnell believes that this $900 billion coronavirus bill is needed to help Kelly Loeffler and David Perdue, the two Georgia Republicans trying to retain their Senate seats in the January 5 run-offs. McConnell told Senate Republicans last week that "Kelly and David are getting hammered" by their Democratic opponents for not passing a bill. This $900 billion package, which is only a fraction of the spending Democrats in the House passed months ago, is the smallest bill McConnell can get away with while still saving those two Senate seats he needs to keep his majority. Trump's most ardent supporters have singled out the Republicans' desire to win in Georgia as a leverage point, and keep threatening to tank that race if Republicans don't do more to help Trump steal the election.

To be clear, this isn't 11th level chess. It's actually Trump employing junior high school bully logic: McConnell wants a thing (this paltry coronavirus relief bill), and so Trump is threatening to take it away unless Trump gets what he wants (a successful coup).  Trump, being very dumb, has not considered the possibility that McConnell couldn't give in to the extortion if he tried because there's actually no secret file in McConnell's office labeled "How To Steal Any Election." Nor has Trump apparently given much consideration to how Democrats might react to him threatening McConnell by pretending that he wants a more generous bill.

Democrats have called Trump's bluff.  Washington Post reporter Mike DeBonis confirmed that Speaker of the House Nancy Pelosi is planning the unanimous consent vote Christmas Eve, which will force Republicans to go on the record against mailing $2,000 checks to Americans. Considering that McConnell is hoping $600 checks will be enough to buy off Georgia voters on January 5, a vote against a more generous bill is clearly something Republican politicians likely hope to avoid.

In no way does this theory require believing Trump is crafty, clever, or heaven forbid, intelligent. Trump is a moron who is employing what he thinks is a clever Roy Cohn-style scheme to blackmail McConnell. It is, however, an idiotic misfire, because he's trying to extort something McConnell simply doesn't have, that is some deeply buried secret method to steal the election.

The best part about this is that Democrats handed Republicans a chance to get rid of Trump a year ago, when the Democratic-controlled House impeached Trump for, yep, another one of Trump's many extortion schemes to keep himself in office. . . . . But rather than accept this golden opportunity to rid themselves of an erratic and disloyal narcissist in favor of a more easily controlled President Mike Pence, Senate Republicans chose to acquit Trump and keep him around.

To thank them, Trump is now blowing up their spot on this coronavirus bill. Because Trump is loyal to no one and can only be failed. To him, you're only as good as the last illegal or unethical thing you did to help him.

And boy, it's hard not to wonder if McConnell isn't regretting his choice to acquit Trump. Because if he'd just taken the chance Democrats gave him back then, he'd have President Pence happily just doing what he's told. But no, like so many discarded lawyers, staffers, and other Trump enablers, McConnell made the mistake of thinking he could somehow protect and enable Trump without Trump screwing him over. But Trump will always betray his allies in the end. It's like the moral of the story Trump loved telling at campaign rallies: Republicans knew Trump was a snake when they picked him up.

Posted by Michael-in-Norfolk at Wednesday, December 23, 2020