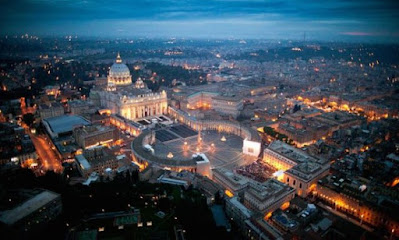 I left Catholicism two decades ago as I reached a point where I could no longer participate in a church than demeaned me, labeled me "inherently disordered" and offered me nothing but more years of condemnation and self-hatred ("praying away the gay" had proven to be a cynical lie). Throw in the global sex abuse scandal and the Church hierarchy's lies, cover ups, and rank hypocrisy and leaving the Catholic became a moral requirement. I have no regrets about leaving the Catholic Church and found solace in the Episcopal Church and Evangelical Lutheran Church in America, two LGBT accepting denominations.  Sadly, two decades later, the Catholic Church continues to cling to a 12th century understanding of sexuality and ignores all modern medical and mental health knowledge.  A piece in The Advocate by a former Jesuit looks at the Church's continued cold war against LGBT individuals. Here are article highlights:

The last 12 months has been another year of the Catholic Church continuing its don’t ask, don’t tell policy of love the sinner not the sin. Another year when the Vatican missed opportunities to affirm the positive contributions of LGBTQ+ people. This year will be remembered as the year the Vatican told lesbians and gays that they were no longer interested in their salvation, or marriage, punting that issue to state rights. . . . Just a few countries away {e.g., Poland], anti-LGBTQ+ zones are rejecting LGBTQ+ people, growing increasingly intolerant towards sexual minorities.

In America, Catholics are inspired to laud Amy Coney Barrett whose Supreme Court confirmation has pitted her style of Catholicism against President-elect Joe Biden. The United States Bishops tell us Barrett can receive communion, but Biden cannot.

In October 2020, Gay History Month, Pope Francis informed parents of LGBTQ+ children that “the church loves your children as they are because they are children of God.” Was this even in doubt? And if it were a true Vatican conviction, why couldn’t I, an ex-Jesuit and gay son eulogize my mother at her funeral at St. Isadore’s Church in Riverhead, N.Y.? (That was so 2019.)

In October, Pope Francis told his flock that heterosexual, married sex can be pleasurable. Isn’t all lovemaking pleasurable, part of an all-good and all-loving God’s plan for his beloved children?

In June, during Pride Month, the Vatican issued its most recent antigay argument: only biological males and females are complementary. . . .Of course the theology of the document does not deviate from century-old Vatican norms or Church dogma, for example, the primal purpose of adult opposite-sex relationships is to procreate. Thus, the Vatican exalts child-making couples, and shames all others; gay, lesbian, non-child bearing, and gender-fluid couples.

Of course, by exalting child-making couples, the Vatican is affirming its stance that sacramental marriage is between one man and one woman. Still, nothing new. But the damage done by this document is likely irreparable.

[T]he Vatican can never use “real-life experience” to shape its theology or dogma. If it did, divorced Catholics could remarry and receive the Eucharist. This is why calling for dialogue and listening to people talk on gender is dubious, if not manipulation by a few progressives to keep the pews filled with a portion of the faithful so easily termed uncomplimentary.

When the Church, through documents like “Male and Female He Created Them” articulates an antigay theology, then through Pope Francis I says, “We must be attentive, not saying all are the same” that “people must be accompanied” it causes confusion, and provides a safe space for discrimination, bullying and violence against the LBGTQ+ community.

Just as the Vatican argues against gender existing along a spectrum so is it becoming increasingly clear, if you do not practice the Catholic faith in the most conservative of ways you are not fully a member of the Church. Whether you hope for a dialogue or listening, the only cudgel against the LGBTQ+ community is leading them to hope in something greater to come. And for LGBTQ+ people, that something greater might just be a change in faith; finding a new home in a house of worship that fully embraces them now and in the eternal life to come. Why settle for less? Jesus did not.

Posted by Michael-in-Norfolk at Saturday, December 26, 2020