Will Principled (and Moral) Conservatives to Start Their Own Party? 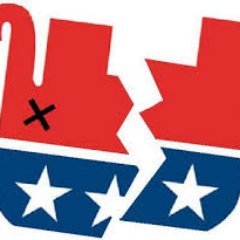 By all appearances Donald Trump has been using his lies and conspiracy theory rants about the "stolen" 2020 election to rake in cash in a major way from the dumb, the gullible and spineless and immoral Republicans who are afraid to become a target of Trump's wrath.  Trump seemingly wants to remain the driving force in the now morally bankrupt GOP through both the money he is amassing and the fealty his base of deporables gives to him.  What is a principled and oral conservative to do?  A column in the New York Times speculates that just maybe a third political party will be born for those sick of Trump and the racism and embrace of ignorance that defines Trump's base - a trend that began when Christofascists began to rise within the GOP during the 1980's and 1990's and solidified with evangelical support for Trump in 2016 and 2020.  Perhaps the column is overly optimistic, but at the moment, the GOP is no longer a political home for those who are not willing to debase themselves for Trump, shred the U.S. Constitution and throw morality overboard.  Here are column excepts:

As the Trump presidency heads into the sunset, kicking and screaming, one of the most important questions that will shape American politics at the local, state and national levels is this: Can Donald Trump maintain his iron grip over the Republican Party when he is out of office?

This is what we know for sure: He damn well intends to try and is amassing a pile of cash to do so. And here is what I predict: If Trump keeps delegitimizing Joe Biden’s presidency and demanding loyalty for his extreme behavior, the G.O.P. could fully fracture — splitting between principled Republicans and unprincipled Republicans.

Wishful thinking? Maybe. But here’s why it’s not entirely fanciful: If Trump refuses to ever acknowledge Biden’s victory and keeps roasting those Republicans who do — and who “collaborate” with the new administration — something is going to crack.

There will be increasing pressure on the principled Republicans — people like Mitt Romney, Lisa Murkowski and the judges, election officials and state legislators who put country before party and refused to buckle under Trump’s demands — to break away and start their own conservative party.

If that happens, the unprincipled Trump Republicans — like the 126 House members who joined with the Texas attorney general in a shameful Supreme Court case to nullify Biden’s victory — could have a harder time winning office. That would be a good thing in its own right.

More important, even if just a few principled conservatives came together and created a kind of third party in Congress, they could be kingmakers. With the Senate so finely balanced, moderates on each side have significant leverage.

Wishful thinking? Maybe. But one thing I learned covering the Middle East is that there is only one reliable thing about extremists — they don’t know when to stop. So, in the end, they almost always go over the cliff, taking a lot of people with them.

Donald Trump is a political extremist. He does not stop at red lights. He does not abide by norms, ethics or the truth. As a result, . . . his attacks on Republican officeholders and right-wing media that won’t parrot his lies and conspiracy theories, is already fracturing the party at the state level in places like Georgia and Arizona.

It’s drawing a sharp distinction between principled Republicans who chose to put their constitutional obligations before Trump’s interests and the unprincipled ones who either are too cowardly to speak up or eagerly hopped into the Trump clown car to secure his blessings for their next election.

On Saturday, CNN described the civil war that has broken out in Arizona: “G.O.P. party leaders and elected officials who’ve gone all-in for Trump, backed by right-wing media, have relentlessly attacked those who can’t bring themselves to go along with the lame-duck president’s refusal to concede. To be sure, similar splits exist across the G.O.P. nationwide. But the infighting in Arizona offers a clear picture of why some Republicans fear that if Trump continues stirring up and directing his followers once he’s out of office, the party may cripple itself at the state and local level.”

To be sure, calling Ducey a “principled Republican” is a low bar, considering that he had no problem backing Trump all the way until now. Unlike other Trump-friendly Republicans, though, he was ready to draw a constitutional redline he would not cross.

But every day that goes by Trump shows us that as his power decreases, he surrounds himself with more and more unprincipled crackpots, who fan his delusions and propose more and more extreme actions, like Michael Flynn’s neofascist suggestion of declaring martial law and rerunning the election in some states Trump lost.

Therefore, the stress that Trump creates will surely get only worse after he leaves the White House, when, to stay relevant, he’ll need to say ever more extreme things that keep his base — now fully marinated in his conspiracy theories — energized and ready to attack any principled Republican who deviates from Trump. Also, all those Fox News commentators who prostituted themselves to Trump (and their ratings), helping to make his extreme base even more extreme, can’t stop now. They’ll lose their audience.

They’re all extremists who can’t stop, and principled conservatives understand that.

“Even though Mr. Trump has been defeated, there is still no home for Republicans committed to representative government, truth and the rule of law, nor is one likely to emerge anytime soon,” wrote McMullin in this newspaper. “So what’s next for Republicans who reject their party’s attempts to incinerate the Constitution in the service of one man’s authoritarian power grabs? … The answer is that we must further develop an intellectual and political home, for now, outside of any party. From there, we can continue working with other Americans to defeat Mr. Trump’s heirs, help offer unifying leadership to the country and, if the Republican Party continues on its current path, launch a party to challenge it directly.”

Call me mad, but my gut tells me that when Trump is just the monarch of Mar-a-Lago — just spewing venom — some Republicans will say “enough.” Somewhere in there a new party of principled conservatives might just get born.

Wishful thinking? Maybe. But what a blessing that would be for America.

Posted by Michael-in-Norfolk at Tuesday, December 22, 2020

Not going to happen. However, if a few "moderate" rethug senators became Independents, they could be kingmakers.