With Luck Trump’s Enablers Will Meet A Shakespearean End 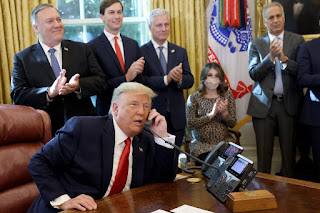 While some us will not breath a final sigh of relief until Joe Biden is sworn in as president and Trump is left to slink off to either his New York or Florida residence, many now assume no matter what half-baked attempt Trump and his circle of idiots and crackpots dream up, the sun is setting on MAGA world and outside of covens of cultists, Trump will increasingly become a fading legend in his own mind.  But what of his enablers and sycophants who aided and abetted in the attacks on morality, decency and the rule of law. As prior posts have noted, some Trump staffers are already feeling the adverse impact of their complicity in evil as hoped for employers turn a cold shoulder.  But there are others form whom one can only hope a Shakespearean end.  A piece in The Atlantic looks at this hoped for result.  Here are highlights (note how it trashes Trump):

It is a mark of these astounding times that news of heated meetings at the White House considering, among other things, the confiscation of voting machines, declaration of martial law, and use of the military to preside over an election outcome more to the president’s liking were met with a collective yawn by the American people. The news of the FDA’s approval of the Moderna vaccine for the coronavirus was much more enthralling, and recipes for single batches of holiday punch, suitable for COVID-imposed isolation, were more immediately relevant.

This could indicate the apathy of the American people, battered by President Donald Trump’s antics, the pandemic, and an imperiled economy. More likely, it represents a reasoned confidence that if Trump were to order General Mark Milley, chairman of the Joint Chiefs of Staff, to arrest President-elect Joe Biden and occupy the capitals of Wisconsin, Michigan, Pennsylvania, and Arizona, the stocky general would report sick for the next 30 days. Judges would block the orders, governors would laugh at them, Republican senators would demurely pretend they had not heard of them. So is there nothing left to be said about the final scene of the final act of this dismal play?

Trump, it bears repeating, is no Shakespearean villain—he is too willful, ignorant, undisciplined, and shallow for that. What we are watching is not the despair of Macbeth . . . . It is, rather, a malignant narcissist’s psyche collapsing in on its hollow core. That process may be of clinical or purely malevolent interest, but it’s not the stuff of tragedy, because Trump is really only a few shards of a genuine human being.

But Shakespeare does have something yet to offer us about this moment when treason against the constitutional order is a matter for serious Oval Office debate. The Bard had a rich sense of the creeps and criminals, sycophants and slimeballs, weirdos and wing nuts who hang around power.

Of course, the cast of characters in Trump’s mad court was much wider than this. Pious hypocrites? Jerry Falwell Jr. could probably take a lesson or two from Angelo in Measure for Measure. After preaching a rather austere morality (death as punishment for premarital sex), he tries to commit rape and judicial murder, thinking he can cover up his adventures. He cannot. . . . while Falwell is alleged to have merely watched rather than indulged, the ruin is similar, and equally well deserved.

But it would be wrong to think that bad behavior in Trump’s court is a masculine matter only. There is, after all, an odd mix of female political advisers, television personalities, and preachers who have, as does Queen Margaret, “a tiger’s heart wrapped in a woman’s hide.” They have not gone mad, as Margaret does, but they do have Joan of Arc’s misplaced self-confidence, and there is time yet.

And then there is the mob. In Henry VI, Part 2, the followers of Jack Cade—played in this production by Rudy Giuliani—call for killing all the lawyers. They also seem to have a desire to kill anyone who can speak French or Latin, or who has any learning at all. But Jack Cade ends up with his head on display to warn others about the price of rebellion against lawful order, as do so many in Shakespeare’s plays. More interesting are the Roman mobs that love Caesar, then approve his murder, then, after some masterful manipulation by Mark Antony, turn on Brutus and the conspirators. They are not particularly picky.

But if Shakespeare takes a dim view of the Make Rome Great Again populace, his scorn for their manipulators is far deeper. Mark Antony is brilliant at crying havoc and letting slip the dogs of war, but he throws away his leading role in the Roman state once he meets Cleopatra. His lust derails a promising career as aspiring global dictator.

The Trump family should not take a great deal of comfort from Shakespeare, either. Yes, Henry V succeeds Henry IV (albeit not without some difficulty), but orderly succession is the exception in his plays. And indeed, Henry V’s own son, Henry VI, turns out to be something of a political dope. Inheriting power is tougher than it looks. . . . Don Jr., Eric, Ivanka, and Jared take note.

Finally, the henchmen. They’re lucky if they get sent packing with their heads still attached to their shoulders . . . It would be pleasant to contemplate a parade of senatorial and congressional lickspittles, craven fixers, nutcase advisers, and unprincipled hangers-on meeting their comeuppance, albeit in considerably less stark terms than befalls most Shakespearean characters. No doubt many will be able to minimize the damage done by their association with Trump. Many will safely monetize their government experience . . . But let’s face it: Once the play is over, the supporting roles rarely get reevaluated, and all the lesser villains can hope for, like Iago, is a bit of wonder at their motivations and eventual fate.

And what of Trump himself? How might Shakespeare summarize his presidency? Let me suggest this: “A tale / Told by an idiot, full of sound and fury / Signifying nothing.”

Posted by Michael-in-Norfolk at Monday, December 21, 2020