Standing Against the Coming Tidal Wave of Deceit 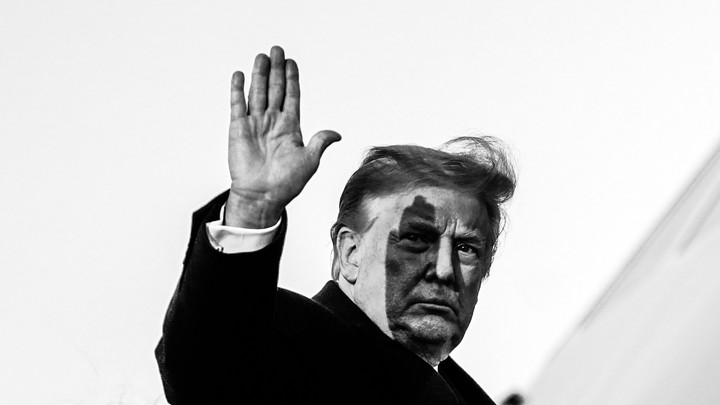 Personally, I will not find total relief until Congress certifies the Electoral College results and Joe Biden is shown into office on January 20, 2021.  These events will end the imminent threat Donald Trump continues to pose to America's democracy, world peace and morality.  But for total healing for the majority of Americans to occur, the crimes and misdeeds of the Trump/Pence regime must be exposed, legislation passed to prevent them from ever occurring again, and Trump being confirmed as the most corrupt and lawless occupant of the White House in American history. This may not sway Trump's white supremacist and Christofascist supporters (the two, in my view, are largely the same people), but an accurate history is critical, especially in the face of the tidal wave of lies Trump will continue to spin.  A piece in The Atlantic looks at why this is importance.  Here are highlights:

President Donald Trump uses his pardon power as an instrument of personal ambition. He pardons people who have lied to protect him, and people who have expressed loyalty to him. Yesterday, he pardoned Charles Kushner, whose son is married to one of Trump’s daughters. More Trump-family pardons may soon be coming.

Public-spirited citizens are understandably angry about these abuses. As the former federal prosecutor Andrew Weissmann, once a leading member of Special Counsel Robert Mueller’s team, wrote, “The pardons from [Trump] this President are what you would expect to get if you gave the pardon power to a mob boss.”

Trump used the pardon power as a tool of self-defense against a criminal investigation. Potential witnesses were induced to keep silent—or to lie outright. To quote Weissmann again, Mueller had to structure his plea-bargain agreements with former Trump campaign chair Paul Manafort “in anticipation of a pardon” by President Trump.

In partial consequence of Trump’s pardon power, the most important questions assigned to Mueller remain unanswered: What exactly was the relationship between Russian intelligence, Julian Assange’s WikiLeaks, and the Trump campaign? . . . . Why has Trump remained so curiously deferential to Russian President Vladimir Putin, and so reluctant to ever criticize him?

If public-spirited citizens rightly feel fierce anger against the abuse of office that Trump’s pardons represent, the story need not end here.

The prospect of Trump’s pardons hindered the prosecution of his associates—and their arrival has now overturned some of the convictions. But the country has much less need to punish the Trump associates than to know exactly what happened. . . . What the country needed was the truth, and that truth is still waiting to be told.

After Trump leaves office, the country will need more than ever an independent investigation that can document the corruption of the Trump era. The truth is needed especially because Trump’s manufacturing of lies will not end with his presidency.

[T]he effort to exonerate Russia for helping Trump in 2016 will continue, and possibly accelerate with Trump out of office. With Trump and the pro-Trump media, it’s never enough to prove the truth once. The truth needs to be as persistent as the lie. Even now, Trump defenders continue to describe the proven fact of Russian assistance as a “hoax,” and the guilty pleas of Trump associates as them being “framed.” The imperative to defend reality against Trumpism will not cease with the Trump presidency.

And so it will be with all the other mythological elements of the Trump dreamworld. They will continue to propagate in ways that poison the American mindscape. The massive corruption of the Trump family will be obscured by false accusations against everybody else—a job of obfuscation that Trump allies may find easier once the Trump family is no longer subject to any kind of official disclosure requirements.

Trump attempted to pervert the 2020 election by sabotaging mail-in voting—so essential amid a pandemic.

When that failed, Trump tried to overturn the outcome of the election in courts he had staffed for that very purpose.

When the courts balked, Trump demanded that Republican state legislators discard the wishes of their voters.

When the legislators refused, he turned to plots for a military coup to seize voting records.

What’s needed post-Trump is a fact-finding commission that can engrave this history on the national conscience. It cannot be a truly bipartisan commission, because one of the two parties is so tragically complicit in Trump’s misdeeds. But it can be nonpartisan: its chairpersons and staff chosen from among those with eminent legal and national-security backgrounds outside the party system.

The commission could be granted access to government records and whatever private records are produced by congressional subpoena. Its job would be to report, not prosecute. Congress can enact new laws, if those seem called for. The executive branch can adopt new rules too. But what America needs is a definitive record, backed by all the prestige of the most trusted American institutions, in order to stand strong, firm, and clear against the coming tidal wave of deceit.

Posted by Michael-in-Norfolk at Friday, December 25, 2020

We should note that numerous "trump-hole countries," such as Rwanda, South Africa, Liberia, South Africa have had "Truth and Reconciliation Commissions," in large part to make it possible for people who have committed vicious crimes and their victims to be able to manage living together again in some degree of reconciliation. And for better or for worse, broadly speaking these have had success.

And we should NEVER FORGET that despite the large numbers of survivors, there are STILL a grotesque number of Holocaust deniers. And I can't help feeling that there is a large degree of overlap between Holocaust deniers and trumpanzees.

We cannot take the position of "Let bygones be bygones." The worst perpetrators must be made to realize, and the citizens as a whole should come to realize, that there is no place for them in civilized society.