It's Time to Invoke the 25th Amendment 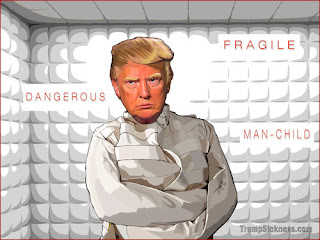 Since being tapped as Trump's vice presidential pick, Mike Pence has shamelessly prostituted himself to Trump's demands and ignored corruption and immorality on a massive scale.  Now, with Trump talking of attempting a military coup and mental health experts and even some advisors believing Trump is in the process of a mental brake down (he's always been mentally ill, but now the danger is severe), Pence needs to grow a spine and rally the cabinet members to invoke the 25th Amendment and remove Trump from office.  This would protect the nation - and world - from who knows what insanity as Trump deteriorates and also give Pence a 30 day stint as president, thus achieving his own dream/fantasy.   A long piece in Politico Magazine looks at Trump's deteriorating mental health and the fear that he may do something horrific.  Here are excerpts:

Donald Trump has never had a week like the week he just had. On the heels of the Supreme Court’s knock-back and the Electoral College’s knockout, some of his most reliable supporters—Mitch McConnell, Vladimir Putin, Newsmax—acknowledged and affirmed the actual fact of the matter. Trump is a loser.

It’s not just his odd behavior—the testy, tiny desk session with the press, the stilted Medal of Freedom ceremony that ended with his awkward exit, the cut-short trip to the Army-Navy football game. It’s even more pointedly his conspicuous and ongoing absences. . . . he’s been fixated more than anything else on his baseless insistence that he won the election when he did not.

“He’s never been in a situation in which he has lost in a way he can’t escape from,” Mary Trump, his niece and the author of the fiercely critical and bestselling book about him and their family, told me. “We continue to wait for him to accept reality, for him to concede, and that is something he is not capable of doing,” added Bandy Lee, the forensic psychiatrist from Yale who’s spent the last four years trying to warn the world about Trump and the ways in which he’s disordered and dangerous. “Being a loser,” she said, for Trump is tantamount to “psychic death.”

The combination of an unprecedented rebuke meeting an uncommonly vulnerable ego has some people wondering if there is a chance that Trump’s unusual actions suggest something potentially more dire. Could he be on his way to a mental breakdown?

Louise Sunshine, for instance, has known Trump longer than just about anybody. She started working with him in the early 1970s—so I sent her a text asking her the question. “Maybe,” she responded.

Everybody, after all, has a breaking point. “And he’s not indestructible,” said Barbara Res, a former Trump Organization executive vice president who was the construction manager for Trump Tower and just wrote a book called Tower of Lies. “I do think Trump is struggling,” Tony Schwartz, the actual author of The Art of the Deal, told me . . . .

“His fragile ego has never been tested to this extent,” Michael Cohen, his former personal attorney and enforcer before he turned on him, told me. “While he’s creating a false pretense of strength and fortitude, internally he is angry, depressed and manic. As each day ends, Trump knows he’s one day closer to legal and financial troubles. Accordingly, we will all see his behavior deteriorate until it progresses into a full mental breakdown.”

“Psychological disorders are like anything else,” said Mary Trump, who’s also a psychologist. “If they’re unacknowledged and untreated over time, they get worse.”

“His pathology has continued to grow, continued to cause him to decompensate, and so we’re at a stage now where his detachment from reality is pretty much complete and his symptoms are as severe as can be.” She likened Trump to “a car without functioning brakes.” Such a car, she explained, can look for a long time like it’s fine, and keep going, faster and faster, even outracing other cars. “But at the bottom of the hill,” Lee said, “it always crashes.”

“His problem is that he has grown up with vulnerability in terms of his self-worth, self-esteem and a clear sense of himself,” Mark Smaller, a past president of the American Psychoanalytic Association, told me. “Somebody with these kinds of vulnerabilities, affirmation, being the center of things, is never enough.

The people who’ve known Trump well, the people who’ve watched him for a long, long time, the mental health professionals—they’re worried, they told me, about what’s to come, in the next month, and in the months and years after that.

“The probability of something very bad happening is very high, unacceptably high, and the fact that we don’t have guardrails in place, the fact that we are allowing a mentally incapacitated president to continue in the job, in such an important job, for a single day longer, is a truly unacceptable reality,” said Lee, the Yale psychiatrist. “We’re talking about his access to the most powerful military on the planet and his access to technology that’s capable of destroying human civilization many times over.”

“You have to remember,” said Cohen, his former attorney. “Trump doesn’t see things the way that you do. He sees things in his distorted reality that benefits him. He’s able to right now embrace that distorted reality because he still wakes up in the White House. But what happens each and every day as he gets closer to not only leaving, but also it comes with a sense of, in his mind, humiliation, right? And he knows that he is destined for legal troubles.”

“Do I think that Trump is going to fall apart in a way where he would become completely dysfunctional and not leave his room? I don’t think so,” said Smaller, the past president of the psychoanalytic association. “But if you’re in this kind of unregulated state, and I think that’s what we’re observing, he’ll do kind of desperate things to maintain that being the center of attention.”

“He will not go away, because this is his psychological lifeline,” Lee said. “For him,” she stressed, “it’s a matter of psychic survival.”

Posted by Michael-in-Norfolk at Sunday, December 20, 2020