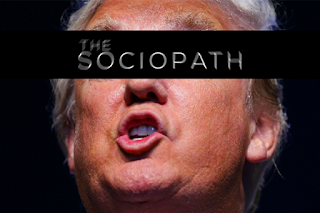 This blog ha stated before and I will state it again: America will never be fully safe from Donald Trump's assaults on democracy until the malignant narcissist ceases to draw breath.  The nation is gripped in a pandemic, millions of families are suffering, hundreds of thousands have died, and government agencies have bee hit by a major Russian hack  and all Trump can focus on is clinging to power, likely to stave off criminal prosecution and be in a position to threaten creditors.  He is pure evil and cares nothing about anyone but himself. Given the choice between saving himself or his children, the children would be thrown overboard in a heart beat. That white evangelicals continue to rally to him shows their utter moral degradation.  A piece in New York Magazine looks at the growing insanity and willingness to do something off the charts that is motivating an ever more self-absorbed Trump and his circle of unhinged crazies. The man is a clear and present danger to the nation.  Here are article highlights:

At the White House on Friday, President Trump held what may have been his most deranged meeting yet. In it, the president raged at his loyalists for betraying him, and discussed taking extralegal measures to overturn the election.

The meeting, first reported by the New York Times, included lawyer and conspiracy theorist Sidney Powell, convicted felon Michael Flynn, and Rudy Giuliani. One plan floated at the meeting was for Trump to appoint Powell as a “special counsel” overseeing allegations of voter fraud. Powell’s voter fraud claims are so fantastical she has been mocked even by other far-right legal conspiracy theorists. Andrew McCarthy, a former birther and author of one book titled How Obama Embraces Islam’s Sharia Agenda and another calling for his impeachment on multiple counts, has described Powell’s vote-fraud claims as “loopy.”

Trump also reportedly brought up Flynn’s proposal, which he has expounded on cable news, to impose martial law and direct the military to hold a new election. “At one point in the meeting on Friday, Mr. Trump asked about that idea,” reports the Times.

Political scientists have debated whether it is accurate to describe Trump’s efforts to overturn the election as a “coup,” an “autogolpe,” or neither. Trump’s interest in deploying the military to cancel an election he clearly lost certainly seems to resolve that debate, at least in terms of his intent.

There is no reason to believe Trump commands the power to actually implement any of these wild ideas. Trump’s best chance to steal the election was to have the decisive voting margin in the Electoral College determined by the counting of mail-in ballots that were mailed before, but arrived after Election Day. This would have let him either persuade the Republican-controlled Supreme Court to invalidate those decisive ballots, or Republican-controlled state legislators to disregard their state’s voting results and appoint pro-Trump electors to represent their state.

But the election was not close enough for him to pursue either strategy, whatever chance he had for some kind of Bush v. Gore replay has passed. The measures he is now contemplating lie outside the normal framework for resolving election disputes, and would require, at minimum, almost uniform levels of GOP support.

Trump does not have that. Indeed the striking thing is that he is veering to positions so extreme and self-defeating that even his loyalists have blanched. Perhaps the most alarming fact about the Friday meeting is that Giuliani, who has spent months spreading fantastical claims of imagined voter fraud, became a quasi-voice of reason. . . . . even Giuliani opposes appointing a nutter like Powell.

One theme running through Trump World reporting in recent weeks is that the president has increasingly tuned out any advisers or friends who try to reason him toward accepting defeat. Friday’s meeting devolved into a loyalty contest, with “yelling and screaming,” and competing lawyers “often accusing each other of failing to sufficiently support the president’s efforts,” reports Politico.

Reporters are emphasizing that it isn’t just the usual Republicans who have always privately worried about Trump who express concern. Advisers fret that Trump “is spending too much time with people they consider crackpots or conspiracy theorists,” reports Jonathan Swan.

In all likelihood, their concern is not some scenario where tanks roll down the streets or Trump blockades himself in the Oval Office on January 20 like Al Pacino in the last scene of Scarface. It’s that Trump will spin so completely out of control that he discredits them, or puts the Georgia special election at risk. The crazies are turning on the crazier.

Posted by Michael-in-Norfolk at Sunday, December 20, 2020