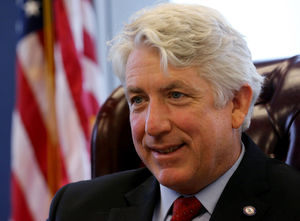 As long time readers know, I was raised Roman Catholic and once was a member of the Knights of Columbus and achieved the 4th Degree.  After the Boston Globe blew open the systemic, worldwide sex abuse scandal in 2002, I decided that I could be longer in good conscience be a part of such a corrupt and morally bankrupt institution.  In February 2002 I did a guest editorial in the Virginian Pilot in response a letter to the editor by then Bishop Richmond, Walter Sullivan's January 30, 2002, decrying a January 21 2002, editorial cartoon and claiming that the stories about the Church were "pure bigotry against the Catholic Church.''  The cartoon in question focused on the Catholic Church's track record in respect to pedophile clergy.

Subsequently, I was attacked in letters to the editor, including a letter from a subordinate of Bishop Sullivan.  Time has proven the accuracy of the Globe story and sex abuse cover ups have been exposed virtually worldwide as numerous blog posts have reported.  Moreover, the cynical and dishonest hypocrisy of Bishop Sullivan was made clear when  Sullivan himself was implicated in the cover up of sexual abuse by a diocesan priest in the Diocese of Richmond that was among Sullivan's favorites.   The tenaciousness of a personal friend of mine and other victims of the priest in question finally resulted in a criminal prosecution against the priest and a plea deal.

It would be nice to believe that this one priest was an anomaly, but given what has been seen in dioceses literally across the globe, such is likely wishful thinking.  Thus, in the wake of the Pennsylvania grand jury report and the launching of investigations of the Catholic Church by the U.S. Attorney in Philadelphia and the Attorney General of the District of Columbia, Virginia Attorney General Mark Herring has launched an investigation of the Catholic dioceses in Virginia.  The Virginian Pilot looks at this development.  Here are article highlights:

Attorney General Mark Herring announced Wednesday he is launching a hotline dedicated to "rooting out" possible clergy abuse in the commonwealth.

It's "part of an ongoing investigation into whether criminal sexual abuse of children may have occurred in Virginia’s Catholic dioceses, and whether leadership in the dioceses may have covered up or abetted any such crimes," according to a news release.

The announcement comes a day after the District of Columbia's attorney general said his office will open an investigation into sexual abuse by Catholic clergy in the local archdiocese.

Virginia is now one of at least 13 states that launched investigations after a shocking grand jury report out of Pennsylvania this summer. That report identified thousands of victims and their abusers following a two-year investigation of Catholic dioceses in that state. It also revealed that leaders of the Catholic Church in Pennsylvania helped cover up the child sexual abuse going back several decades.

Herring said at a press conference Wednesday that his office started the probe a few days after the Pennsylvania report came out.

"Like so many Americans, I read the grand jury report on clergy abuse in the Catholic dioceses in Pennsylvania, and I felt sick," Herring said in a statement. "It made me sick to see the extent of the damage done, the efforts to cover it up, and the complicity and enabling that went on by powerful people who should have known better and should have done more to protect vulnerable children."

"It's certainly an unusual step (in law enforcement) to announce an ongoing investigation," he said, "but in this instance ... we need the public's help to get to the truth."

People can report incidents of clergy or faith leader abuse anonymously through the new Virginia Clergy Abuse Hotline at 1-833-454-9064 and www.VirginiaClergyHotline.com at any hour of the day. It will be staffed by Virginia State Police investigators during business hours, according to the release.

Virginia is home to two Catholic dioceses: Richmond, which includes 153 parishes statewide, and Arlington, which includes 69 in Northern Virginia. Hampton Roads is part of the Richmond diocese.

Herring said the dioceses have been "cooperative at this point" and the investigation will "take as long as it needs to ... no matter how long it takes."


I will not be surprised to learn that Virginia's dioceses were no different that others around the world where crimes against children and youths were routinely covered up and predator priests protected.  We know for certain that Sullivan protected at least one predator priest.  I suspect many more may be revealed.  Kudos to Herring.
Posted by Michael-in-Norfolk at Thursday, October 25, 2018