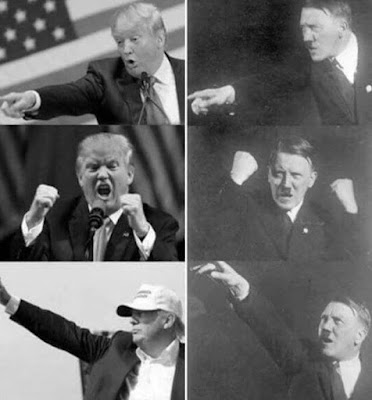 In the countdown to the 2018 midterm elections less than a week away, Donald Trump continues to pander to white nationalists.  He did it again Monday night at a rally to support the reelection effort of Ted Cruz, one of the sleaziest and most dishonest members of the U.S. Senate.  There, Trump - campaigning with a Hispanic political prostitute only too happy to throw other Hispanics into the gutter or, better yet, to have them deported, stated he is a "nationalist" and in the process tried to walk back the sinister historical meaning of the term which is something very different than patriotism.  Nationalism carries with a racists and xenophobic undercurrent that is part and parcel with the Trump?pence regime effort to define some as "other" or a "threat"which in turn justifies abuse and mistreatment or worse.  Here are highlights from Politico on Trump's declaration:

Donald Trump on Monday evening proudly asserted that he is a “nationalist” — a designation some of his fiercest critics have previously wielded against him as an attack on what they deem nativist policy pursuits by his administration.

“You know, they have a word, it sort of became old-fashioned. It’s called a nationalist,” Trump said at a campaign event in Houston, where he rallied voters to support Sen. Ted Cruz (R-Texas) in November’s midterm elections.

Earlier Monday, Trump took to Twitter to proclaim that a caravan of migrants en route to the southern U.S. border was a “National Emergency,” writing online that “Criminals and unknown Middle Easterners are mixed in.”

Trump's claims about "middle Easterners" had not data or intelligence to back up the disingenuous claim (lie is perhaps a more accurate description).   I would go further and argue that even pretending that Hispanics from Central America - Honduras in particular - with Maya ancestry look like Middle Easterners is ludicrous to anyone other than rabid Trump supporters who hate anyone who isn't white.  But that red herring missing the true historic meaning of "nationalism."  To see what the term actually means and to get an insight into the true agenda of "nationalists" one can look to a piece by George Orwell.  Here are highlights:

By ‘nationalism’ I mean first of all the habit of assuming that human beings can be classified like insects and that whole blocks of millions or tens of millions of people can be confidently labelled ‘good’ or ‘bad’. But secondly — and this is much more important — I mean the habit of identifying oneself with a single nation or other unit, placing it beyond good and evil and recognising no other duty than that of advancing its interests. Nationalism is not to be confused with patriotism. Both words are normally used in so vague a way that any definition is liable to be challenged, but one must draw a distinction between them, since two different and even opposing ideas are involved. By ‘patriotism’ I mean devotion to a particular place and a particular way of life, which one believes to be the best in the world but has no wish to force on other people. Patriotism is of its nature defensive, both militarily and culturally. Nationalism, on the other hand, is inseparable from the desire for power. The abiding purpose of every nationalist is to secure more power and more prestige, not for himself but for the nation or other unit in which he has chosen to sink his own individuality.

A nationalist is one who thinks solely, or mainly, in terms of competitive prestige. He may be a positive or a negative nationalist — that is, he may use his mental energy either in boosting or in denigrating — but at any rate his thoughts always turn on victories, defeats, triumphs and humiliations. He sees history, especially contemporary history, as the endless rise and decline of great power units, and every event that happens seems to him a demonstration that his own side is on the upgrade and some hated rival is on the downgrade. . . . . Every nationalist is capable of the most flagrant dishonesty, but he is also — since he is conscious of serving something bigger than himself — unshakeably certain of being in the right.

[N]o nationalist ever thinks, talks, or writes about anything except the superiority of his own power unit. It is difficult if not impossible for any nationalist to conceal his allegiance. The smallest slur upon his own unit, or any implied praise of a rival organization, fills him with uneasiness which he can relieve only by making some sharp retort. If the chosen unit is an actual country, such as Ireland or India, he will generally claim superiority for it not only in military power and political virtue, but in art, literature, sport, structure of the language, the physical beauty of the inhabitants, and perhaps even in climate, scenery and cooking.

All nationalists have the power of not seeing resemblances between similar sets of facts. A British Tory will defend self-determination in Europe and oppose it in India with no feeling of inconsistency. Actions are held to be good or bad, not on their own merits, but according to who does them, and there is almost no kind of outrage — torture, the use of hostages, forced labour, mass deportations, imprisonment without trial, forgery, assassination, the bombing of civilians — which does not change its moral colour when it is committed by ‘our’ side. The Liberal News Chronicle published, as an example of shocking barbarity, photographs of Russians hanged by the Germans, and then a year or two later published with warm approval almost exactly similar photographs of Germans hanged by the Russians.

It is the same with historical events. History is thought of largely in nationalist terms, and such things as the Inquisition, the tortures of the Star Chamber, the exploits of the English buccaneers (Sir Francis Drake, for instance, who was given to sinking Spanish prisoners alive), the Reign of Terror, the heroes of the Mutiny blowing hundreds of Indians from the guns, or Cromwell's soldiers slashing Irishwomen's faces with razors, become morally neutral or even meritorious when it is felt that they were done in the ‘right’ cause.

The nationalist not only does not disapprove of atrocities committed by his own side, but he has a remarkable capacity for not even hearing about them. For quite six years the English admirers of Hitler contrived not to learn of the existence of Dachau and Buchenwald. And those who are loudest in denouncing the German concentration camps are often quite unaware, or only very dimly aware, that there are also concentration camps in Russia. Huge events like the Ukraine famine of 1933, involving the deaths of millions of people, have actually escaped the attention of the majority of English russophiles.

Every nationalist is haunted by the belief that the past can be altered. He spends part of his time in a fantasy world in which things happen as they should — in which, for example, the Spanish Armada was a success or the Russian Revolution was crushed in 1918 — and he will transfer fragments of this world to the history books whenever possible. Much of the propagandist writing of our time amounts to plain forgery. Material facts are suppressed, dates altered, quotations removed from their context and doctored so as to change their meaning. Events which it is felt ought not to have happened are left unmentioned and ultimately denied.

Indifference to objective truth is encouraged by the sealing-off of one part of the world from another, which makes it harder and harder to discover what is actually happening. There can often be a genuine doubt about the most enormous events. . . . Moreover, although endlessly brooding on power, victory, defeat, revenge, the nationalist is often somewhat uninterested in what happens in the real world. What he wants is to feel that his own unit is getting the better of some other unit, and he can more easily do this by scoring off an adversary than by examining the facts to see whether they support him. All nationalist controversy is at the debating-society level. It is always entirely inconclusive, since each contestant invariably believes himself to have won the victory. Some nationalists are not far from schizophrenia, living quite happily amid dreams of power and conquest which have no connection with the physical world.

It is no coincidence that much of the foregoing seems all too familiar over the course of the last two years, not to mention during the Trump/Pence campaign.
Posted by Michael-in-Norfolk at Wednesday, October 24, 2018