The Far-Reaching Threats of a Conservative Court 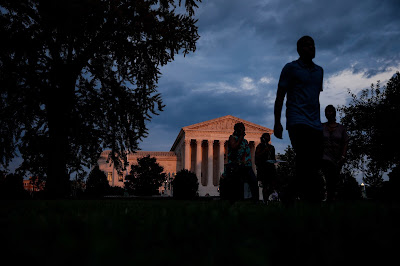 Of all the things Donald Trump and Vichy Republicans have done to date to undermine democracy in America, perhaps the worse is the shifting of the U.S. Supreme Court to the far right.  With a majority of justices who seemingly would undo progressive legislation from the New Deal forward and happily see a return of the robber baron days of the Gilded age, the damage could be immense.  The circumstances also highlight the need to do something to change the make up of the U.S. Senate where the disproportionate representation of small states - Wyoming with two U.S. Senators has a smaller population than the cities of Virginia Beach and Norfolk when added together - wildly exceeds anything the Founding Fathers could have envisioned.  Indeed, the Senate now almost guarantees a tyranny of the minority of anti-modernity, racist red states which in general have smaller populations than blue states which for the most part fund the federal government hand outs to red states. A column in the New York Times looks at the coming threat from a right wing Supreme Court which will likely bring us more pollution, inaction on climate change and an erosion of individual rights and protections.  Here are column excerpts:

With the start of the Supreme Court’s new term, many people are wondering whether the conservative majority, which has taken a further step to the right with the appointment of Brett Kavanaugh, will overturn Roe v. Wade.

But that’s not where the action is. As two cases argued before the court this month illustrate, the real question is whether it will undermine the system of government that has protected the public from abusive business practices since the New Deal.

The two cases might seem esoteric, and far removed from government protection of workers and consumers. Gundy v. United States involved a challenge to the attorney general’s extension of sex-crime-registration law to offenders convicted before the law was enacted. Nielsen v. Preap involved a government policy that deprived certain unauthorized immigrants of some procedural protections against deportation.

The conservative majority can, and most likely will, rule against the government using broad theories that would also eat away at the constitutional foundations of the New Deal system, which is essential for protecting health and safety, the environment and much else.

Since the New Deal, Congress has authorized regulatory agencies to make policy by issuing regulations. These agencies are now a familiar part of our government. They include the Environmental Protection Agency, the National Labor Relations Board and the Federal Emergency Management Agency, which is currently aiding hurricane victims in Florida. Agency regulation became necessary as the problems of a modern industrialized nation overwhelmed the regulatory capacities of states, local governments and Congress itself.

The New Deal agencies initially encountered resistance from the Supreme Court, which was then, like now, a reactionary institution that frowned on novelty. . . . Eventually, common sense prevailed over these legalistic objections. Congress itself lacked the capacity to engage in the detailed regulation that is necessary to keep a modern economy humming while protecting workers and consumers. Agencies were needed.

.But Brett Kavanaugh is a skeptic. And so are Neil Gorsuch, Donald Trump’s first appointment to the Supreme Court, and Clarence Thomas, who was appointed back in 1991. The views of Chief Justice John Roberts and Justice Samuel Alito are less clear, but their judicial opinions point in the same direction.

The conservative assault on the administrative state has four elements.

First, Justices Gorsuch and Thomas want to revive a discredited legal rule that was invoked by the Supreme Court in 1935 and then abandoned. The “nondelegation doctrine” says that Congress may not “delegate” its legislative power to administrative agencies . . . .

Second, Justices Gorsuch, Kavanaugh and Thomas want to undermine a rule called the Chevron doctrine, after a 1984 Supreme Court case. That rule says that when an agency regulation is based on a reasonable interpretation of a statute, courts should “defer” to the agency. The Chevron rule codified existing judicial recognition of the core idea of the administrative state. Specialists — in environmental hazards, in credit markets, in workplace safety — should regulate.

Third, the conservative justices dislike the principle of agency autonomy and have looked askance at job protections for agency officials.

Fourth, the conservative justices have endorsed a novel interpretation of the First Amendment that protects businesses from regulation — from campaign finance regulation, labor regulation and even regulations that require them to disclose information to consumers.

Justices Kavanaugh, Gorsuch and Thomas claim to be “originalists,” who believe that the court should strike down laws that violate the original understanding of the Constitution. But the founders did not bar Congress from creating administrative agencies or think that the First Amendment protected businesses from commercial regulation.

The new conservative jurisprudence may help some businesses in the short run but ultimately will undermine the legal structure in which they flourish.

The answer is both obvious and depressing. The modern conservative jurisprudence is an exercise in nostalgia, a yearning for pre-New Deal America when, supposedly, government was less oppressive and people were freer than they are today. You can see this nostalgia in the homilies to olden times in Justices Gorsuch’s and Kavanaugh’s lectures — and their insistence that answers to today’s challenges can be found in a theory of government invented in the 18th century by men wearing breeches and powdered wigs.

This jurisprudence appeals to many people in a populist era that distrusts experts, chafes at bureaucracy, fears change and longs for a simpler past. But like so much being peddled by ideologues and partisans these days, it’s a sham.

Posted by Michael-in-Norfolk at Tuesday, October 23, 2018